The City of Toronto has initiated an Avenue Study to examine mixed land use and built form potential along Dufferin Street, between Highway 401 to just south of Lawrence Avenue West. This part of Dufferin Street has been identified as an Avenue in the City of Toronto Official Plan. The intent of the study is to develop a planning framework and recommendations which implements this.

Key map of for the Dufferin Avenue Secondary Studyresultant vision.

The Study Area for the Dufferin Street Avenue Study is bounded by Highway 401 to the north to just south of Lawrence Avenue West, and includes those lands with frontage on Dufferin Street. 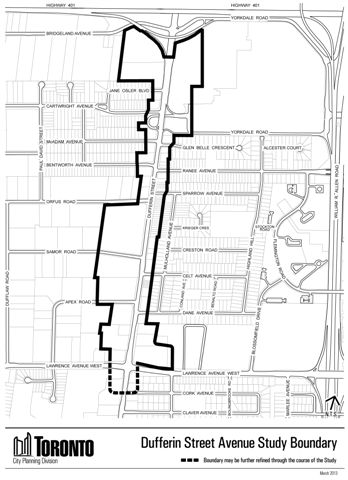 The consulting team working on the Study is led by DTAH and includes RE Millward, ARUP, Fabian Papa & Partners, N. Barry Lyon Consultants Limited and SWERHUN.

The Study examined the need for new infrastructure in the area such as new streets, water mains and sewers. In accordance with the Master Plan process, the Study satisfies Phases 1 and 2 of the Municipal Class Environmental Assessment Planning and Design Process. This process included clearly establishing the problems and/or opportunities to be addressed, and developing and evaluating a reasonable range of alternative solutions. Further, public consultation was an important part of this process. While your comments and involvement were welcome at any time, the process ensures that there was public meetings held at key decision points.

The Dufferin Street Avenue Study will be executed in four phases, as outlined below.