History of the Dieppe Raid

The Dieppe Raid was one of the first Canadian Army actions in Europe in the Second World War. It was carried out to test an amphibious assault  by the Allies against Nazi Germany.  Tragically, for the Canadians who landed on the beach, the raid was a disaster.

On August 19, 1942, the Allied forces executed a raid on the French coastal town of Dieppe. Known as Operation Jubilee, almost 5,000 of the 6,000 troops at Dieppe were Canadians. While these forces were not yet ready for a full-scale invasion of France, the Dieppe raid was designed to test the plans that were being created for a later, larger assault. The operation was originally planned for July but was delayed until August due to poor weather.

The plan was for the troops to attack Dieppe from five different points along the beach, with the first wave going in just before dawn. Massive cliffs riddled with German strongholds loomed over the beaches of Dieppe, leaving the Allied soldiers in clear view and vulnerable to attack. The cover of night would be key if the Allies were to be successful.

However, on the morning of August 19, an Allied landing craft encountered a German convoy, engaging in gunfire that alerted the Germans on land. Although they had hoped to land under the cover of night, this encounter delayed the Allies until after daybreak and their arrival was now expected.

The Royal Regiment of Canada landed at Puys, also known as Blue Beach. This beach was extremely narrow, with a high, barbed-wired sea wall and soaring cliffs. In the light of day, the Germans were easily able to attack the incoming troops.  A few were able to get over the wall, but most of the Royal Regiment was pinned on the beach and forced to surrender within a few hours of landing. Canadian soldiers on the other beaches of Dieppe also had the same experience.

Dieppe had the highest number of Canadian casualties in a single day during World War II.

Dieppe was a pivotal lesson for the Allied nations and would be useful in D-Day preparations that would later turned the tide in World War II two years later, in 1944. But it came at a steep price for Canada and many Torontonians. On the 80th anniversary of this raid, Toronto remembers its  many brave residents who fought at Dieppe.

The localized impact of the high number of casualties was connected to losses in the Royal Regiment of Canada, soldiers whom were largely drawn from Toronto along with the Toronto Scottish Regiment, the Royal Canadian Engineers, 2 Field Company and others.

While Dieppe resulted in the highest number of Canadian casualties in a single day during World War II, the impact of this day was keenly felt in Toronto. Toronto was a city with just over 600,000 inhabitants at the time, and many parents, siblings and spouses of the soldiers were left grieving the loss of their loved ones. Most of those killed at Dieppe were quite young given that the average age of Torontonians who died at Dieppe was 26, with some only 18 years of age. To this day, the Dieppe Raid continues to represent the largest loss of life in a single day, for all wars in Toronto’s history.

Since 1942, Toronto has honoured and remembered the Raid in several ways:

On January 11, 1943, the then East York Township council renamed the park: Dieppe Park.  A memorial plaque at Dieppe Park honours those who fought on the beaches at Dieppe in France, and was unveiled on July 20, 2003.

In June 1953, following a visit to England for the Coronation of Queen Elizabeth II, Mayor Allan Lamport (who was a Squadron Leader with the Royal Canadian Air Force from 1939-1945) visited Dieppe, France and other significant war memorials and cenotaphs in the country to honour the fallen.

Prisoners of war taken at Dieppe marked the 25th Anniversary of the Raid with a march on Nathan Phillips Square and wreath laying at the Old City Hall Cenotaph.

Mayor June Rowlands presided over a ceremony, attended by the Governor General, at the Old City Hall Cenotaph, “Fifty Years Since Dieppe”, to commemorate the 50th anniversary of the Battle.

A memorial plaque at Dieppe Park honours those who fought on the beaches at Dieppe in France, and was unveiled on July 20, 2003. The plaque states:

On August 19, 1942, 6,000 allied troops embarked on 250 vessels from Southern England on a daylight raid on the German occupied French resort town of Dieppe. Almost 5000 of these soldiers were young Canadian men.

Of the Canadians who embarked on the raid, almost 4000 were killed, wounded or taken prisoner.

Of the 1000 soldiers who returned to England, 600 of them were wounded.

On January 11, 1943, East York Township Council renamed this site Dieppe Park. This plaque is a permanent memorial to honour the brave soldiers who fought and died for our country.

On August 19, 2022 the City of Toronto held two ceremonies to commemorate the 80th Anniversary of the Dieppe Raid.

In the morning, a wreath laying ceremony was held at Old City Hall cenotaph at which Mayor of Toronto and other representatives lay wreaths to honour Canadian soldiers, including the over 200 soldiers from Toronto, who made the ultimate sacrifice at Dieppe on August 19, 1942.

The evening commemoration at Dieppe Park brought together family members who shared stories by relatives from Toronto who were Killed in Action, taken Prisoner of War, contributed on the home front and those who returned home as veterans. Poppies were placed below an exhibit to represent the 209 Torontonians who never returned home and display panels were unveiled. Prior to this ceremony, the Royal Canadian Legion, held a wreath laying ceremony at the East York Civic Centre Cenotaph followed by a march to Dieppe Park.

Wreaths were also laid on the beach and at the Canada memorial in Dieppe, France, by a member of the Toronto Scottish Regiment . 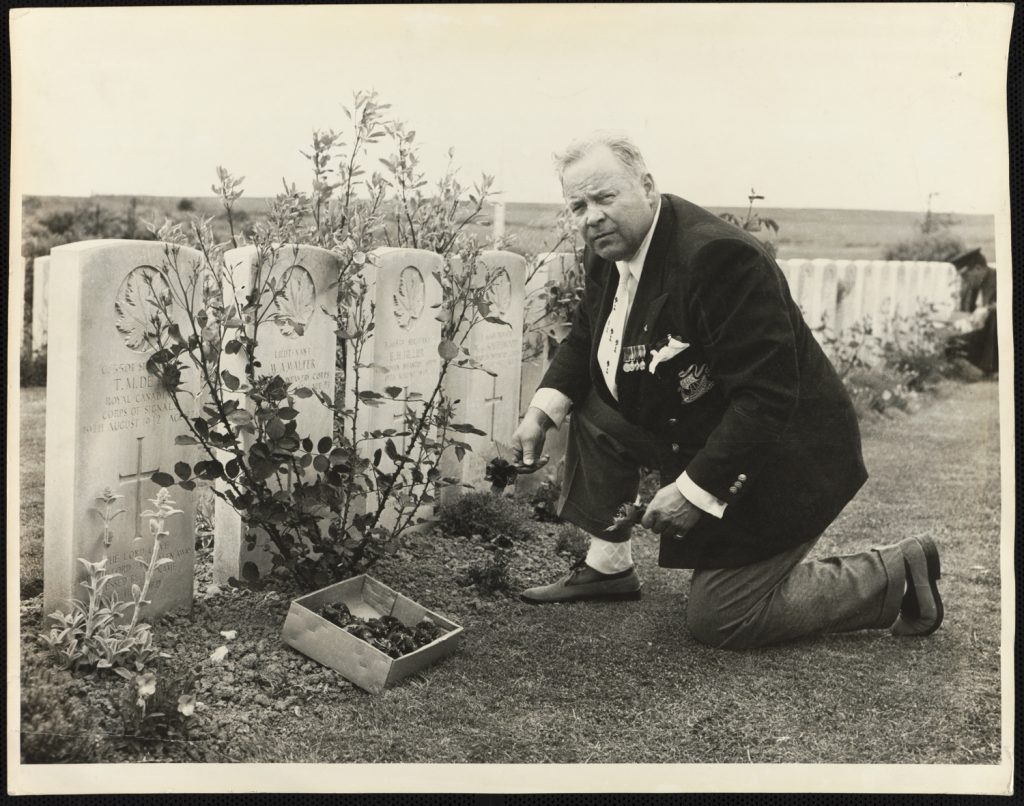 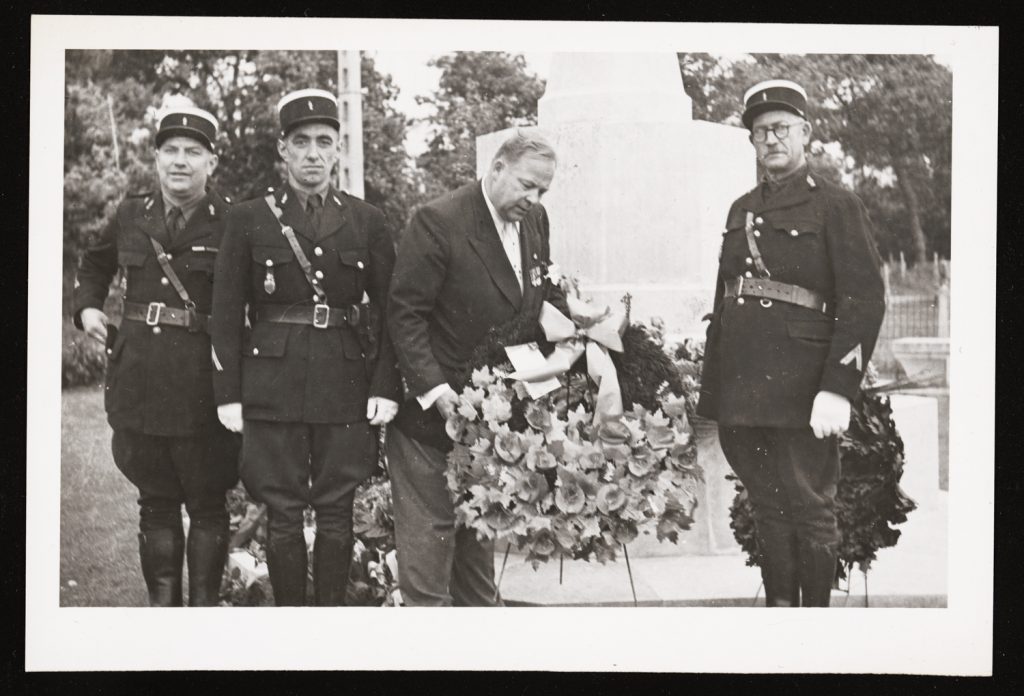 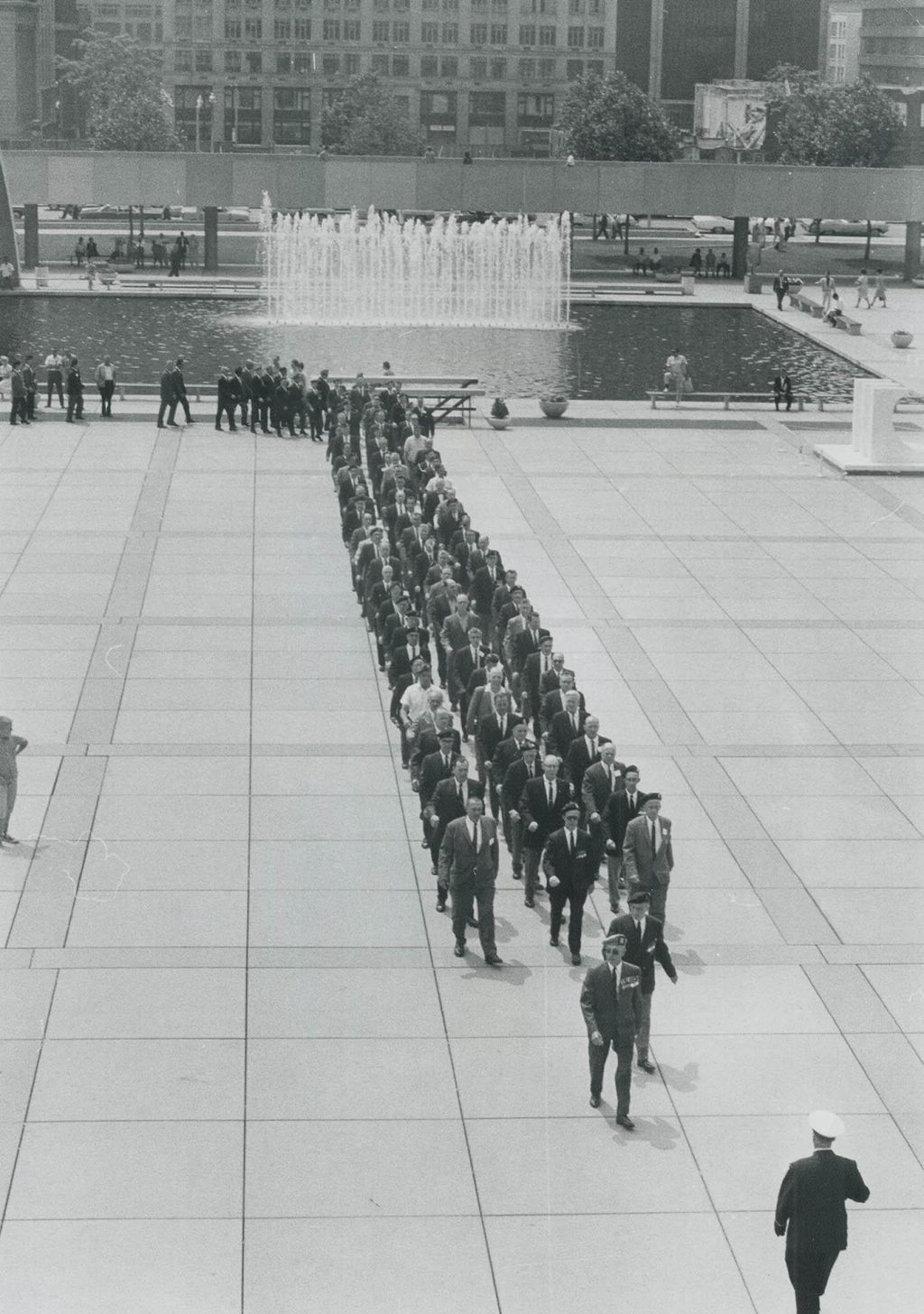 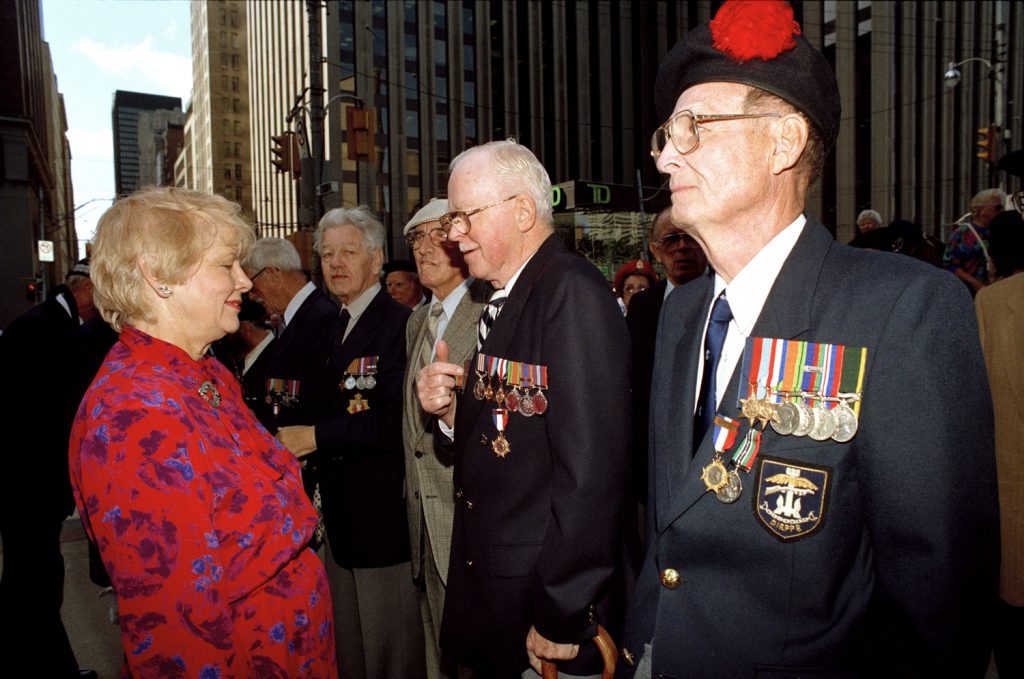 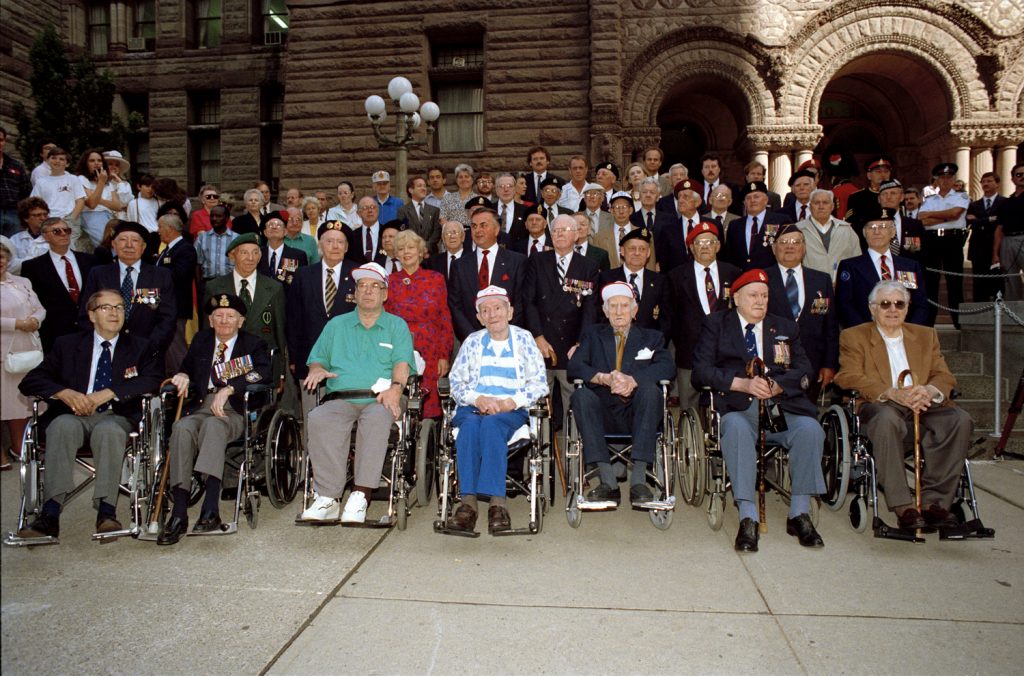 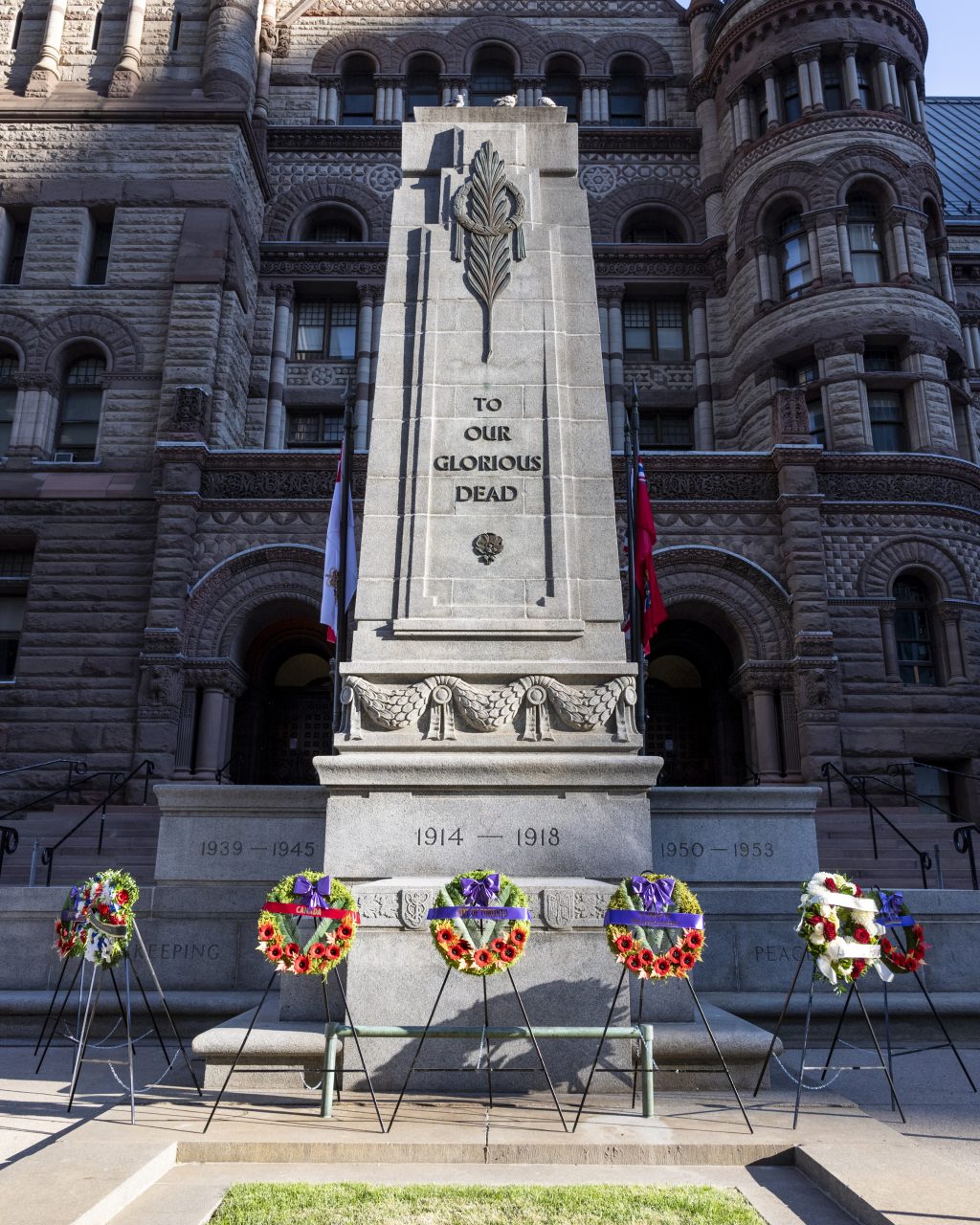 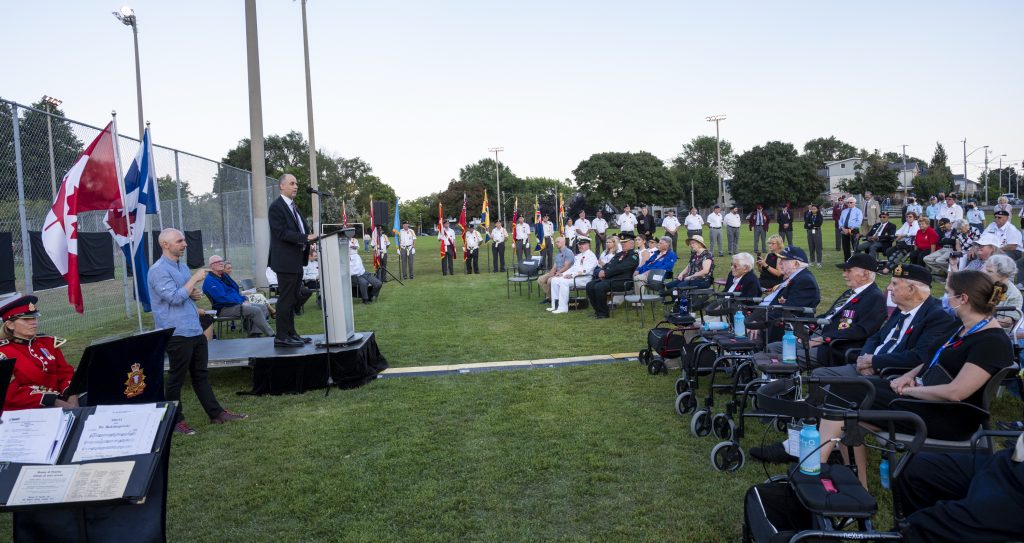