The September 19th meeting at the Ralph Thorton Community Centre has been cancelled and will be rescheduled at a later date.
Sign up for notice of
next meeting

The City is undertaking a Traffic Management and Mitigation Study within the Leslieville Community. The objective of this study is to identify the key congestion areas and propose innovative short- and long-term projects to mitigate transportation issues.

The September 19th meeting at the Ralph Thorton Community Centre has been cancelled and will be rescheduled at a later date. To receive notice of the next meeting date, email Project Manager Lukasz Pawlowski.

The study team is developing the Traffic Management and Mitigation Plan (TMMP) on the basis of feedback received from the first Public Open House, as well as a review the existing and future conditions for the area. A second Public Open House will be scheduled for the Fall of 2019, where residents will have an opportunity to provide comments on the draft TMMP before it is finalized. We anticipate completing the Study by the end of this year.

The second meeting will be scheduled later in the fall of 2018, to present alternative solutions for discussion and feedback.

The City of Toronto launched a Traffic Management and Mitigation Study within the Leslieville Community. This community is in transition as there are numerous applications for redevelopment, mainly mixed-use. Two Public Open Houses will be held to present the study, illustrate current and future traffic conditions, and proposed mitigation measures.

The study area is defined as Queen Street East to the north, Leslie Street to the east, Lake Shore Boulevard East to the south and McGee Street (Booth Avenue south of Eastern Avenue) to the west. 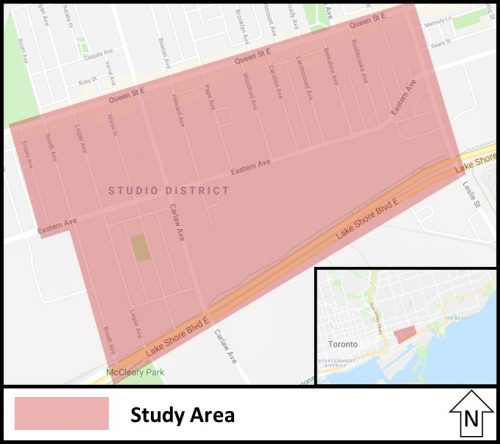 There are currently a number of transportation issues that will be intensified once development has been completed. These transportation issues led to the City Council meeting on November 3 and 4, 2015, where a motion introduced by Councillor Paula Fletcher was carried concerning the 629, 633 and 675 Eastern Avenue Zoning By-Law Amendment. The motion is as follows:

There are a variety of methods for the public to participate in the development of the Traffic Management and Mitigation Study. Contact the Project Team and attend the two Public Open Houses.

The meeting will be an open house format with a formal presentation at 6 p.m. Information presented will include existing traffic conditions, alternatives being considered and mitigation measures. The second meeting will be scheduled later in the fall of 2018, to present alternative solutions for discussion and feedback.

The Traffic Management and Mitigation Study will assess the impacts on traffic from development projects on the transportation network within the Leslieville Community, and include associated mitigation measures. Issues that will be explored include: