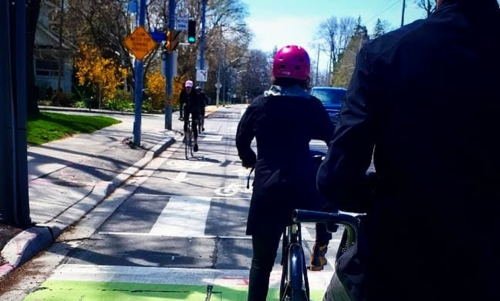 For both The Esplanade and Mill Street, bi-directional cycle tracks are being added. They will allow for cycling in both directions on one side of the road. They are attractive to a wide range of people at all levels and ages, and will connect to other bi-directional trails to the east. They will encourage people cycling to use the cycling facilities on the road instead of the promenade. The protected bike lane will run on the north side of Parliament Square Park through the southern edge of the parking lot.  The protected bike lanes will connect to existing bikeways on Bayview Avenue, Cherry Street, Lower Sherbourne Street and Yonge Street. Intersection changes will also enhance the safety of vulnerable road users.

To learn more about the changes on The Esplanade, Parliament Square Park and Mill Street, watch the following video.