In the 1920s several private companies established businesses to provide motor coach services between Toronto and other locations in Ontario. These companies were successful because of the strong public demand for buses, but they were travelling into the city in competition with the municipally-owned TTC and the suburban electric railways. To protect its investment in public transportation services, the City of Toronto authorized the TTC to acquire the most important of its competitors in 1926.

To promote business and its reputation as a progressive company, the TTC built the Toronto Bus Terminal in 1931. Located on Bay Street, just north of Dundas Street, the architecture of the terminal was the latest in Art Deco styling. Facilities included a waiting room, travel bureau, baggage check, washrooms, telephones, and restaurant services. Other coach companies, such as Toronto Greyhound Lines and Colonial Coach Lines also used the terminal on a rental basis. 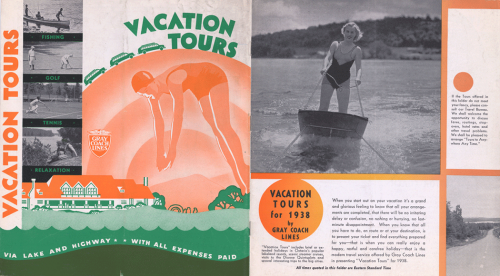 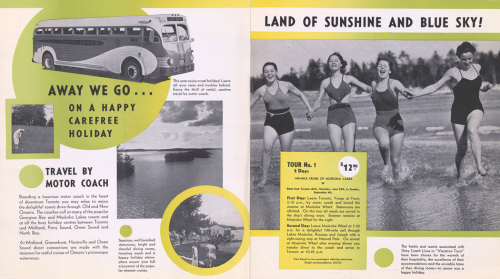 When GO Transit was formed in 1971, Gray Coach Lines was contracted to operate some of its bus services. However, this contractual relationship ended in the late 1980s when GO took over complete operation of its routes. Facing stiff competition in the 1980s, Gray Coach sought to strengthen its position by acquiring rival inter-urban operator Trentway-Wagar.

The TTC was enduring its own budgetary pressures though, and decided it had to direct its scarce resources towards its core responsibility of providing local public transit in the metropolitan area, rather than in the rest of Ontario. In 1990, the Commission sold Gray Coach Lines to Stagecoach, who then sold the business to Greyhound Canada and Ontario Northland Motor Coach Services in 1992.

Previous: Ferry Service
Back to introduction and menu
Next: The PCC Streetcar