Before the birth of the TTC in 1921, Toronto had a hodgepodge of transportation services.The history of public transportation services in Toronto started in 1849, when a cabinet maker named H.B. Williams built an omnibus in his shop at 140 Yonge St. This horse-drawn vehicle carried six passengers, each charged a sixpence. The route went from the St. Lawrence Market to the corner of King and Yonge streets, and then went north on Yonge St., terminating at the Red Lion Hotel in Yorkville. So popular was this service that Williams had a fleet of eight omnibuses by 1850. However, he soon faced competition from horse-cars, whose wheels ran along iron rails, providing a faster and smoother ride. In 1862, the new Toronto Street Railway (TSR) Company purchased control of William’s company, and omnibus service came to an end.

On March 26, 1861, the Toronto Street Railway was granted a 30-year franchise by the City of Toronto to provide passenger transportation services. The proposed routes were on Yonge, Queen, and King streets. The Yonge line was the first to open on September 11, running north to the toll gate at Yonge St. and Davenport Rd. The fare was five cents and a separate fare was charged when transferring from one line to another. In 1861, Toronto’s population was 42,000. The TSR owned six miles of track and carried an average of 2,000 passengers a day.

Demand led the TSR to expand its services so that by 1884 there were 30 miles of track, with service extended to College, Spadina, Church, Front, Sherbourne, Carlton, and Parliament streets. By then Toronto’s population had grown to 105,000 people.

Municipal ownership of the rail transportation system lasted only a few months. The franchise was once again put out to tender, and in September 1891 it was awarded to the Toronto Railway Company (TRC). One of the City’s stipulations was that the system was to be completely electrified within three years, and indeed horse-car service was phased out on August 1, 1894. Cash fares remained at five cents, but the TRC introduced free transfers between its own lines.

In 1904, the T&YRR merged with or absorbed the Metropolitan, Mimico and Scarboro lines. In doing so, the TRC or the T&YRR were providing services across most of the city. However, there were no free transfers beyond the boundaries of the old city limits of 1891. By 1910, Toronto’s population was 350,000, and the city limits had been extended to include an area nearly twice the size it had been in 1891. Although pressure was put on the Toronto Railway Company to extend service into the new districts, there was no financial incentive for them to do so. With the status quo, the TRC or its own subsidiary collected an additional fare every time a passenger transferred from one line to another. 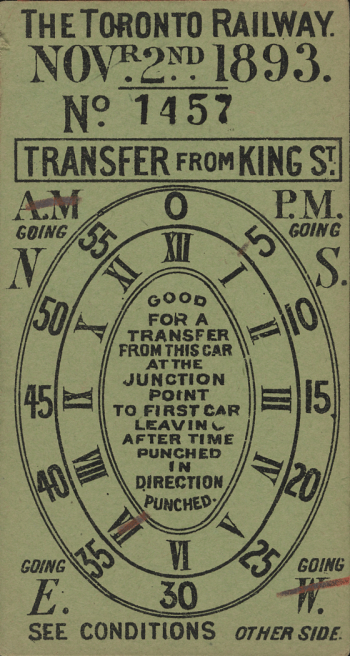 In 1911, in response to the appeals of suburban citizens for better transportation services, the City constructed and equipped a new street railway called the Toronto Civic Railway. Its routes were on the outlying portions of Danforth Ave., Gerrard St. E., St. Clair Ave. W., Lansdowne Ave., and Bloor St. W., adding 22 miles of street railway trackage. Civic Railway fares were only two cents, but there were no free transfers except between the St. Clair and Lansdowne lines.

This jumble of services led to dissatisfaction. As the 1921 termination of the Toronto Railway Company’s franchise neared, Toronto’s ratepayers decided to take action. On January 1, 1920 they voted to approve the acquisition by the City of Toronto of all of the various companies in the city, and to establish a civic commission to operate all public transportation in the city.

In June 1920, the Toronto Transportation Commission was incorporated by an Act of the Ontario Legislature. On September 1, 1921, the City acquired all of the assets of the Toronto Railway Company and transferred them and the Civic Railways assets to the TTC. Through this amalgamation the TTC was able to establish a unified one-fare system. Fares were four tickets for 25 cents or a cash fare of 10 cents, with free transfers.

Previous: 100 Years
Back to introduction and menu
Next: New Vehicles and New Tracks