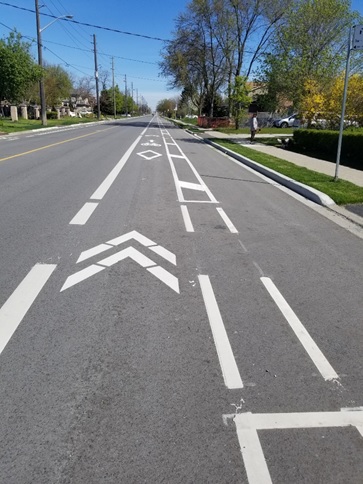 The City of Toronto upgraded the existing bike lanes on Conlins Road between Ellesmere Road to Sheppard Avenue East to a combination of bicycle lanes and cycle tracks (bicycle lanes that are physically separated from traffic).This work was done as part of already scheduled road resurfacing on Conlins Road in 2019.

This upgrade provided a safer and more comfortable connection for cyclists. In particular, the cycle track portion between Canmore Blvd. and Sheppard Ave. E. ensures a separated bicycle lane along “The Meadoway” bike trail route. When completed, this 16 kilometre separated bike trail will run along the Gatineau Hydro Corridor from the Don Valley to Rouge National Urban Park and Conlins Road will connect the Meadoway sections north and south of Highway 401.

In 2022, StreetARToronto is planning the Conlins Road Cycle Track Art Project to celebrate diversity, inclusion and the health and wellness benefits of active transportation and a vibrant public realm.

The Ten Year Cycling Network Plan was approved in-principle by City Council in 2016 to connect, grow, and renew cycling infrastructure throughout Toronto. The planned road resurfacing for Conlins Road provides an opportunity to renew and upgrade the existing bike lanes, consistent with the objectives of the Plan. 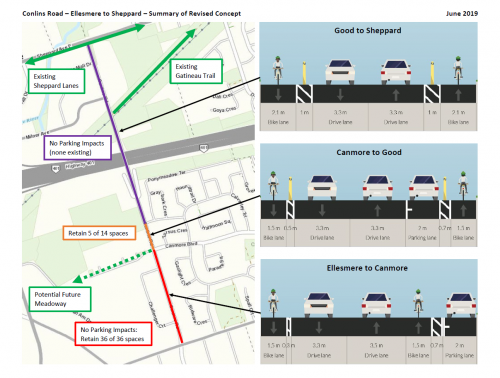 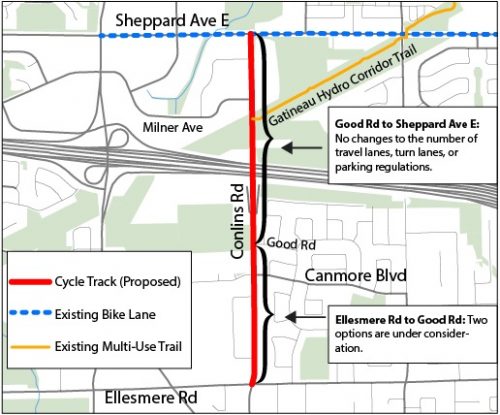