The Richmond-Adelaide Cycle Tracks, including Peter Street and Simcoe Street, were installed as a pilot project between 2014 and 2016. After installation, the cycle tracks on Richmond Street and Adelaide Street have become the highest volume cycling facilities in Toronto. On January 30, 2019 the cycle tracks were made permanent by City Council.
Installation of bicycles lanes on Blue Jays Way from Wellington St W to Navy Wharf Ct. were completed from November 6 to 9, 2019.

Switching Adelaide Street Cycle Track to the Left Side (North Side)

There are currently gaps in the cycle tracks at commercial loading zones and TTC stops.

City staff are changing the configuration of Adelaide Street by moving the separated cycle track from the right side (south side) lane configuration, to the left side (north side). 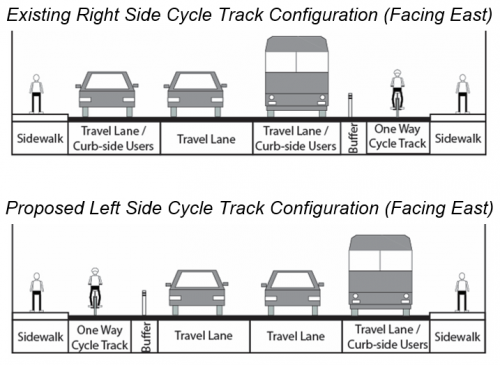 The left side cycle track configuration extends from Bathurst Street to Parliament Street.

On June 25, 2018, the City hosted a drop-in event at Metro Hall to introduce this proposal to the community and receive feedback. Over 60 individuals participated and provided comment.

To request assistance reading this file, please contact the Cycling Unit at cycling@toronto.ca.

Why This Change Is Being Considered

Between York Street and Yonge Street, two large commercial business complexes on the south side have requirements for queuing and access to major truck loading docks. There are also several TTC bus stops on the south side.

A new left side cycle track configuration on Adelaide Street would have the following benefits:

All existing left side parking and loading zones will need to be removed and replaced on the right side, as needed and where feasible, in consultation with adjacent properties.

The number of traffic lanes, bike lane width, and use of flexi-posts with planters, is expected to remain about the same, mirrored on the left side.

If the Richmond-Adelaide Cycle Tracks are approved as a permanent cycling facility, modifications would be made to the design in the future. Potential modifications could include providing a greater degree of separation between cyclists and motor vehicles, pavement marking modifications, and traffic signal timing modifications.

Prior to installation of the pilot bike lanes, the City consulted with the public and stakeholders through workshops, meetings, and extensive communications.

Following the installation of cycle tracks on Richmond, Adelaide, and Simcoe, the City received feedback through public online surveys, meetings with local business representatives, and email and voicemail to the project inbox.