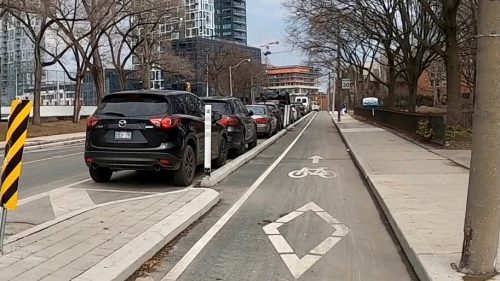 The City of Toronto implemented a road reconstruction on Shuter Street from Sherbourne Street to River Street in 2020. As part of this project, the City made changes to the configuration of the roadway on Shuter Street between Bond Street and River Street to enhance safety for people walking, cycling and driving. These changes included upgrading  bicycle lanes to cycle tracks.

The Shuter Street Bike Lanes project was approved by City Council on April 30, 2020 and completed in December, 2020.

In July 2022, City Council authorized improvements to the intersection of Shuter Street and River Street between 2022 and 2023. The changes include:

A copy of the staff report is available under IEC agenda item IE 31.12.

The commenting period for this consultation is now closed.  All comments and survey responses that were received have been reviewed, and this feedback has been considered by the project team in the development of a staff report.  This report was presented to the Infrastructure and Environment Committee of City Council on March 11, 2020, for consideration.

On Tuesday, January 21, 2020, the City hosted a Public Drop-In Event to present information about the proposed project and provide an opportunity for the public to ask questions, speak with City staff and provide feedback on the proposed design.

To learn more about the project, view the materials that were presented at the event:

The City planned road reconstruction on Shuter Street in 2020.  This major road work presented an opportunity to consider improvements to the design of the road that will enhance the safety of all road users. Given the current volume of vehicle traffic on Shuter Street, the City proposed changes to the configuration of the road and upgraded the existing bike lanes to separated bike lanes (‘cycle tracks’) between Bond Street and River Street. Separated bike lanes increase the safety and comfort of all road users by reducing conflicts between people driving, cycling and walking.

In Spring 2020, the City carried out reconstruction on Shuter Street between Sherbourne Street and River Street. This work involved removing and replacing the asphalt surface and road base, and some sections of curb and sidewalk. This work was needed to bring the road into a state of good repair.

In addition to these changes, new asphalt and pavement markings improved the safety and comfort of all road users.

To provide the necessary space in the road for separated bike lanes, parking was retained on only one side of the street from Bond Street to River Street. The preferred configuration of parking in the proposed design maximizes the amount of space for parking and minimizes impact to permit parking spaces (see Project Information Panels 13-15).

In addition to the proposed cycle track, safety improvements were completed at the curb and sidewalk at several intersections on Shuter Street. Corner radii were reduced (‘tightened’) in order to slow vehicle turning speed, increase the visibility of people who are walking and reduce crossing distances for pedestrians. Tactile plates were installed to assist people with low vision.

Selection of Shuter Street for Upgrade to Cycle Track

We recognize this was a decrease in the historical convenience for those people who travel by car. This trade-off in parking convenience was proposed in order to improve the safety of people traveling by bike and the comfort of all road users. By improving cycling infrastructure in the area, some existing car trips may also be converted to cycling trips.

Current users of Pay-and-Display spaces could utilize paid parking in various off-street lots in the vicinity. Existing Free spaces have a 3 hour time limit; people who are using these spaces for longer than three hours are violating existing by-laws and should be utilizing alternate parking arrangements.

In the design, the physical separation was dropped in front of the school to allow school buses to load and unload directly to the curb. Maintaining the separation along the bike lane would require the children who are boarding or leaving a bus to cross the cycle track, creating a conflict with people cycling. The conflict of a bus crossing the bike lane before stopping beside the curb is brief in comparison to the potential for conflict when children are boarding or leaving the bus. A similar design is used for the Wellesley Street cycle track without complaint.

The separated bike lanes have remained open year round and are cleared of snow using specialized snow removal machines, like those used on other cycle tracks in Toronto.

With the exception of the school bus loading zone, vehicles are permitted to stop in the cycle track for purposes of loading or unloading directly to the curb. Drivers must use available parking spaces or side streets in the area for deliveries and for picking up and dropping off passengers.

Protected intersections that involve two unidirectional cycle tracks, such as at Shuter Street and Sherbourne Street, are not able to fit within the 20 m x 20 m area owned by the City, even if all turn lanes are removed. Property acquisition on all four corners would be required, which would delay the project by many years. Relocation of above-ground utilities (hydro poles) and, potentially, underground utilities would be required, which would also delay the project. Implementation of protected intersection elements (e.g., setback crossings) at other intersections would also require property acquisition on corners.

The existing road width on the Dundas Street bridge cannot accommodate four lanes of traffic and bike lanes. Removal of travel lanes would require all motor vehicle traffic to share a lane with streetcars, causing increased delay to transit customers, particularly eastbound, due to queuing for the left turn onto the Don Valley Parkway.

While we aim to provide fully accessible content, there is no text alternative available for some of the content on this page. If you require alternate formats or need assistance understanding our maps, drawings, or any other content, please contact cycling@toronto.ca.