The City of Toronto’s Remembrance Week Activities commemorate those who paid the ultimate sacrifice in the First World War, the Second World War, the Korean War, Peacekeeping missions and in Afghanistan.

Each November 11, the City of Toronto hosts Remembrance Day ceremonies to remember and pay respect to those who have given their lives in service to our country. In serving their country and making the ultimate sacrifice, they created and shaped the rights and freedoms we enjoy today.

Due to the COVID 19 pandemic, Remembrance Day services may be delivered differently in 2020 and more information will be available shortly.

The Golden Book of Remembrance pays tribute to the war dead from the Second World War, containing the names of service men and women from Toronto who paid the ultimate sacrifice.

The Great War Book of Remembrance contains the names of over 3,200 members of Toronto-based regiments who died in service to our country, during the First World War.

Marking the 75th year since the Normandy invasions by allied forces, a City of Toronto Flag was sent to the Juno Beach Centre in France.

The flag that was flown on Juno Beach on April 9, 2019, Vimy Ridge Day, commemorates the heroism and sacrifice of Canadian Troops on
Juno Beach on D-Day.  The flag was returned to the City and will fly on the Podium Roof of City Hall on Remembrance Day and each year on June 6 and other occasions.

Each year the City of Toronto holds Remembrance Day services to remember those who have given their lives in service to our country. We pay respect to them for helping to create and shape the rights and freedoms we enjoy today. In so doing, we also honour the men and women who have served and continue to serve our country in the Canadian Armed Forces.

Each element of the day’s program is symbolic and pays tribute to the courage, service and sacrifice of those who have served and continue to serve during times of war, conflict, as well as to maintain peace.

In past years, elements of Remembrance Day services have included: 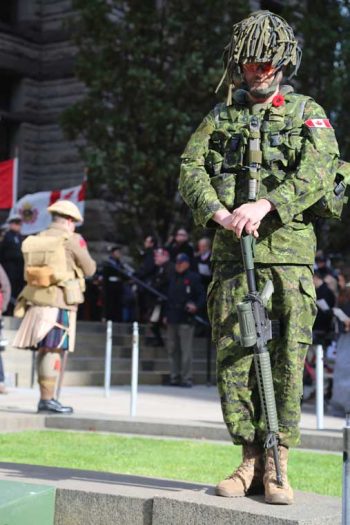 The sentries stand vigil at the four corners of the cenotaph or memorial with heads bowed and rifles reversed (known as reverse arms).

The sentries take their post prior to the commencement of the commemorative service and remain in position until the colours are marched off and they are dismissed. 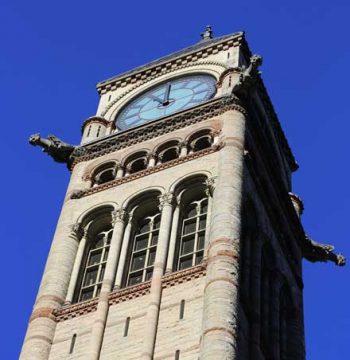 The Old City Hall clock tower bells ring at 11 a.m. to mark the end of the First World War and the armistice that went into effect on the 11th hour of the 11th day of the 11th month. This date is now known as Remembrance Day. 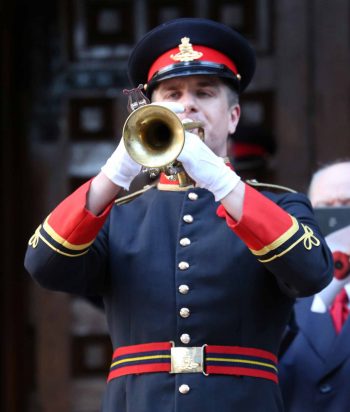 The Last Post is played by a bugler. Traditionally, it symbolizes the end of the day in the military.

Historically, it was played to let soldiers still on the battlefield know that fighting was over and that they should return to camp.

In a commemorative service, the playing of The Last Post symbolizes the soldiers’ final call and summons their spirit to the cenotaph.

Playing it at the beginning of the ceremony indicates that the day’s proceedings are outside the norm, as it is a day of commemoration.

The ceremony starts with music which is normally played at the end of the day and ends with what is normally heard at the start. 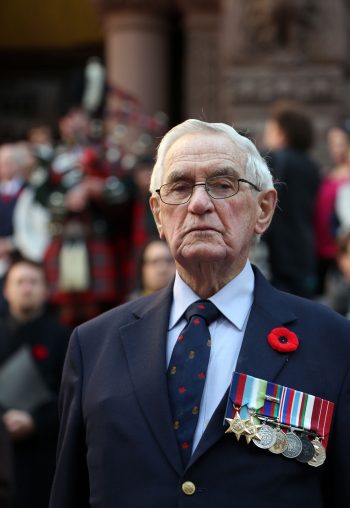 Two Minutes of Silence is the central element of Remembrance Day ceremonies. It is a time to pause and remember the service and sacrifice made by men and women who have given their lives in service to our country.

The Silence originated in Cape Town, South Africa, where there was a daily moment of silence, known as the Two Minute Pause which started in 1918. It was initiated by a daily firing of the noon day gun on Signal Hill. The first minute was a time of thanksgiving for those who had returned alive, the second was to remember the fallen.

In 1919, King George V asked that it be observed throughout the Commonwealth and it has been an important feature of remembrance ever since.

In Ontario, the Remembrance Week Act 2016, encourages the voluntary observance in pausing and observing two minutes of silence. During this time, we honour those who died serving their country in wars and in peacekeeping efforts. 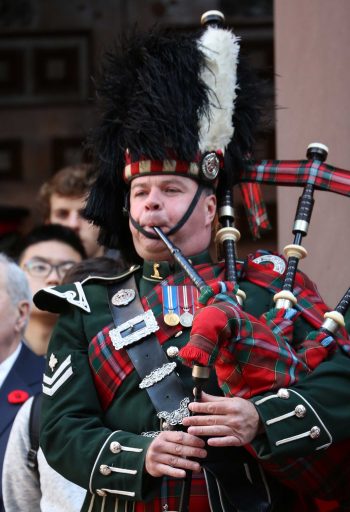 The Lament titled The Lament to the Fallen is played by a piper to honour fallen soldiers.

The Scottish folk tune Flowers of the Forest commemorating the defeat of the Battle of Flodden in 1513, is often played at a funeral to honour the deceased.

The Rouse is played by a bugler. It is normally the first call sounded in the morning and used as a wake-up call for the soldiers.

During a Remembrance Day ceremony, it is played to signify the resurrection of the spirit of the fallen at the conclusion of the Act of Remembrance.

The flypast is a type of aerial salute that serves to pay respect to the fallen.

Canadian Harvard planes are flown in the missing man formation in memory of a fallen pilot.

The Canadian Harvard aircraft was used to train the thousands of pilots involved in the D-Day invasion, flying the fighters and bombers over Europe. They were used in the last phase of training before a pilot got his wings and moved on to the fighters or bombers in operational units. As part of the British Commonwealth Air Training Plan, the aircraft was used in training more than 20,000 pilots throughout the duration of the war. 2019 marks the 80th anniversary of the first delivery to the RCAF – July 21, 1939.