Starting in 2023, the City of Toronto will reconstruct Bloor Street West between Avenue Road and Spadina Avenue. As part of this work, the City will make a number of improvements to enhance accessibility and safety for all road users.

Improvements on Bloor Street West will include:

The Bloor Street Bike Lane Pilot Project was approved by City Council in May 2016 and were made permanent in 2017. The existing cycle tracks will be raised on both sides, similar to the Bloor Street West section just east of Lippincott Street implemented in 2019. 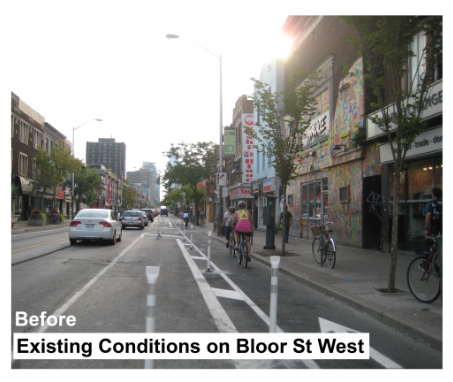 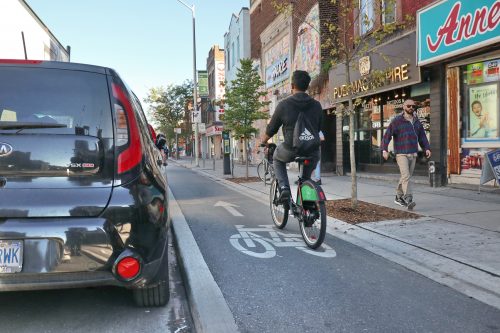 The construction of cycle tracks between Spadina Avenue and Avenue Road is the continuation of cycling infrastructure improvements started on Bloor Street West in 2019.

Sections of sidewalk of Bloor Street West will be replaced in areas where needed.

Transit stops at Madison Avenue and Bedford Road will be upgraded to accommodate the new cycle track and meet current standards for accessibility. Existing bus stops will be replaced with 30 metre-long raised platforms where buses will pull up alongside the cycle track. People cycling will yield to people boarding and exiting buses.

The planned improvements will require some changes to street parking:

The road from Avenue Road to Spadina Avenue will be reconstructed and resurfaced from curb to curb. This work will involve full road excavation, reconstruction and resurfacing.

As part of the planned road work the City will

The City held a virtual Public Information Event on Thursday May 5, 2022 from 6:30 p.m. to 8 p.m. to present an update on this project and provide an opportunity for the public to ask questions.

The project team is working to actively keep local residents and businesses informed throughout different stages of this project. To receive construction updates by email, subscribe to the project email.