Made in Toronto – Pantry Items

While Toronto’s manufacturing landscape created industry leaders in the meat, bread, and milk sectors, the city was also home to a number of notable manufacturers of products that would have been familiar in any household pantry – staples such as baking powder, jelly powders, flavouring extracts, ketchup, marmalade, mustard, and maraschino cherries.

This chemical leavener, developed in Birmingham, England in 1843 was first produced in Toronto by Pure Gold Manufacturing and E.W. Gillett & Co. Established in 1884, Pure Gold manufactured at least two kinds of baking powder – Pure Gold and Cook’s Choice – in addition to a wide selection of herbs, spices, seasonings, flavouring extracts, ketchup, and roasted and ground coffees. 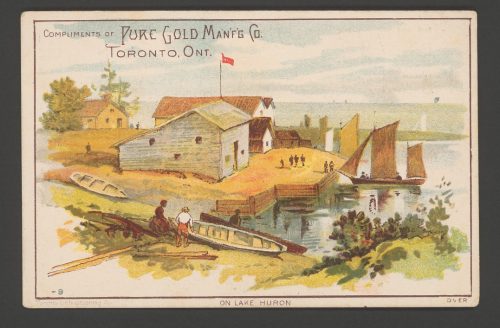 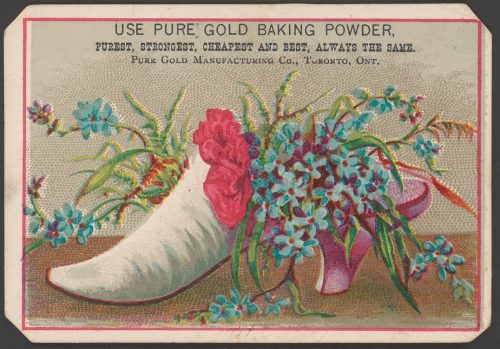 Pure Gold’s original factory and warehouse, designed by Toronto architect A. Frank Wickson and constructed in 1901, was located on the north-west corner of King Street West and Duncan Street. In 1904, Pure Gold sold the building to move to a new facility, shown in the following photograph, on College Street at Lippincott. The buyer of the King Street building was none other than rival the E.W. Gillett Co., whose property had been destroyed in the Great Fire of 1904.

E.W. Gillett entered the Toronto market in 1886, the Canadian branch of an established Chicago firm. Like Pure Gold, Gillett had a diverse portfolio of products; however, they’re probably best remembered for Magic Baking Powder, which was created in 1897. Today Magic Baking Powder is manufactured by Kraft Canada.

Joseph, Joshua, and Charles Dalton started out as soap and candle manufacturers in London, Ontario, but soon expanded their offerings after moving to Toronto in 1871. Here, as Dalton Bros. they established a coffee and spice mill at the south-west corner of Front Street East and Princess Street.

The spice business, which involves grinding, blending, and packing spices and herbs, was a staple of Toronto’s food manufacturing landscape. In 1880 alone, there were seven mills listed in the city directory. When the company relocated to 227 Front Street East in 1936 or 1937, Dalton’s was making a name for itself in glacé (candied) fruits and maraschino cherries. Today Toronto-based Reinhart Foods Ltd. manufactures maraschino cherries under the Daltons brand – the largest producer of its kind in Canada.

Shirriff’s, best known for its lemon pie filling, was founded in 1883 by Francis Adam Shirriff (1848-1944) as the Imperial Extract Company. It specialized in flavouring extracts used in baking, although the company soon expanded its product line to include jams and jelly powders. 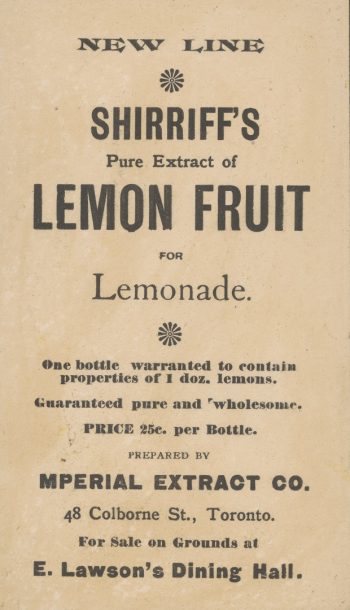 In 1905 Shirriff’s showcased its traditional Scottish marmalade to attendees of the Pure Food Show held at Massey Hall. According to The Toronto Daily Star, “expressions of approval were frequent.” Shirriff’s sold several varieties of marmalade, including Seville Orange, Shredded Orange, and Pineapple. Good Morning Marmalade, a blend of lemon, orange, and grapefruit, was their most popular product.

Radio played a significant role in food and beverage advertising. During the 1940s, Shirriff’s sponsored a long-running weekly radio program called “Fun Parade.”  The program aired on Toronto radio station CFRB and others across Canada.

After a series of mergers that began in 1953 with the creation of Shirriff-Horsey, the company’s marmalades and ice cream toppings were acquired by the J.M. Smucker Co. in 1988, while its puddings, pie fillings, and mousses were sold to Dr. Oetker Canada Ltd. in 1992.

Venerable British food manufacturer Crosse & Blackwell (est. 1706), famous for its preserves and pickles, decided to open a Toronto plant in 1927. The modern new facility, located at the intersection of Fleet and Bathurst streets, employed over 200 women and 1,000 men in the production of jams and pickles.

The building is perhaps the company’s greatest legacy in Toronto. Designed by Chapman and Oxley, it housed executive and general offices, a three-storey factory space, and a rotunda ornamented with stained glass that was intended to showcase the company’s line of over 200 products. When it was completed in 1928 the structure was praised as the embodiment of good industrial design. Today it is listed on the City’s Inventory of Heritage Properties.

Despite the efficiencies of its purpose-built factory and the advantages of a brand familiar to the city’s British immigrants, the company was facing bankruptcy proceedings less than ten years after its arrival.

Although the Toronto outpost of the brand didn’t survive, Crosse & Blackwell remained in business until 1960 when it was acquired by Nestlé. Today, it forms part of the J.M. Smucker Company family of products.

Back to Introduction
Next page – Chocolate