That I May be of Service – Beginnings

The Hospital and the Training School for Nurses

Toronto General Hospital (TGH) is the oldest and largest hospital in Toronto. For more than 165 years it has been providing acute care patient services to the community.

Located in the heart of the city, it has an emergency department that serves over 30,000 patients a year. The hospital has been a world leader in health care and numerous firsts were developed at the facility.

The hospital first opened in 1829 and was called the York General, reflecting the town’s name before it incorporated in 1834 and adopted its new name of Toronto. The hospital was located at the corner of King and Simcoe streets.

By 1856 the hospital had outgrown this facility and moved into a much larger building at Sumach and Gerrard streets. It remained at that location for 57 years.

In 1877 the staff began considering the idea of starting a school for nurses within the hospital. The first training school in the United States had opened at Bellevue Hospital in New York City in 1873, and the first one in Canada was established the same year at the General and Marine Hospital in St.Catharines.

The School for Nurses of the Toronto General Hospital was officially established in April of 1881, and was led by the Lady Superintendent of the hospital, Miss Harriet Goldie. She was assisted by Miss Eliza J. Storrie.

When the nursing school opened, the hospital was ill-equipped to provide for the students. Of necessity, they slept at odd places throughout the hospital wards, wherever there happened to be some extra space.

There were no provisions made for their rest and relaxation, and they ate their meals in a prison-like room in the basement. However, they were allowed a beer ration.

Continual advances in medicine resulted in the expectation that the trained nurses would receive theoretical instruction in addition to practical schooling. Consequently, every year the curriculum was expanded until 1891, when the teaching period was extended to nine months, from October to July. The subjects taught were practical nursing, anatomy, physiology, medical, surgical and obstetrical nursing, communicable diseases, and diseases of the eye, ear, nose and throat.

Instruction was given entirely by members of the medical staff, except in the subject of practical nursing. In 1896, the program was increased in length from two years to three. 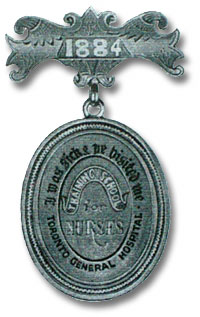 No new subjects were added but third year students were charged with the task of managing the wards. A band of black was added to the caps of the third year nurses so that they could be distinguished from the more junior nurses.

By the 20th anniversary of the school in 1901, there had been a total of 347 graduates. Many of these were filling important positions as superintendents of other hospitals, as nurses in other institutions, or in missionary service. That year 28 different hospitals applied for graduates of TGH to fill important administrative positions.

The business of nursing the sick was now being recognized as skilled work, demanding well-trained professionals.

In 1913, the hospital moved again, this time to the intersection of College Street and University Avenue. It subsequently expanded south to fill the block bounded by College and Gerrard streets, University Avenue and Elizabeth Street.

The nurses’ residence had accommodation for one hundred and eighty nurses and provided comfortable bedrooms, a dining room, and plenty of attractive sitting rooms and common areas.

Morning prayers were held daily and residents had to abide by strict rules and curfews. No men were allowed in the rooms.

In 1974, the responsibility for training nurses was shifted from hospitals to the local community colleges. The School of Nursing, Toronto General Hospital ceased operations and was absorbed by George Brown College.

Next page – About the Alumnae Association