Since opening in 1981, the Toronto Sculpture Garden (TSG) commissioned temporary artworks by over 80 artists, in a small City of Toronto park opposite St. James Cathedral on King Street East. Until 2014, it was operated as a partnership between the City of Toronto and the Louis L. Odette Family, benefactors who created the non-profit L.L.O. Sculpture Garden Foundation which funded and administered the exhibitions. Under the direction of Rina Greer, the TSG provided artists with the opportunity to work experimentally in public space, explore issues of scale and materials, and engage with the local community as well as visitors to the neighbourhood. For some, the expansion of their practice beyond the studio led to major public artworks elsewhere.

The Toronto Sculpture Garden is now managed by the City of Toronto’s Arts & Culture Services. 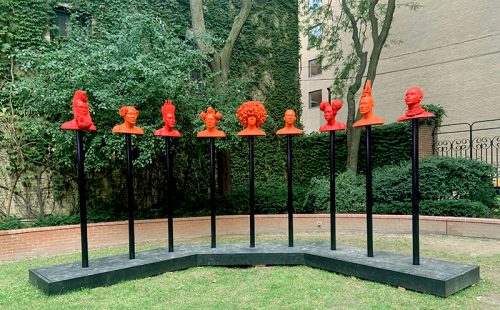 Afrophilia is a love letter to Black people. This work is inspired by the generation of young Black people who are driving a shift in self- perception and changing our global consciousness of Blackness to appreciate its immense value, diversity, and beauty. By rejecting respectability politics and refusing to be identified with narratives of oppression, they can instead identify with the joy of being human; Black Love as a revolutionary act. These sculptures in their vibrant orange and red reflect the energy and attitude of these revolutionary people, heroes that are deserving of this commemoration. This installation celebrates a culture of self-acceptance. Learn more about the installation.

Frantz Brent-Harris is a Jamaican sculptor based in Toronto. His work is predominantly figurative and explores the complexities of outward-projection spectator perception for black people. His work tries to portray in a tangible form the constant tension of double consciousness and cognitive dissonance that corrupts the psyche of Black, African and Caribbean people when encountering the barrage of negativity from a white supremacist society.

Black Artists’ Networks in Dialogue (BAND) is a charitable organization dedicated to supporting, documenting and showcasing the artistic and cultural contributions of Black artists and cultural workers in Canada and internationally.

The Toronto Sculpture Garden is located at 115 King Street East, just east of Church Street, directly across the street from St. James Cathedral and between two of the oldest buildings in the city, dating from the 1840s.

The park is approximately 80′ by 100′ (25m x 30m) and is open to the public between 8 a.m. and 11 p.m. With its proximity to King Street to the north and the St. Lawrence market neighbourhood to the south, the park serves a wide variety of users, from those who live and work in the area to visitors to the neighbourhood and the City, people of all ages, those seeking out art and those coming across it by accident.