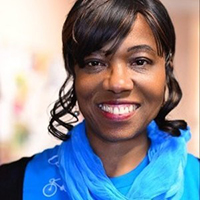 Laurie Fisher is a retired provincial government employee, who in the past 11 years has worked in more meaningful roles including administrative receptionist, community activist, and writer for the newsletter at the Workers’ Action Centre.

In late 2020, she was voted onto the Workers’ Action Centre Board of Directors. She recently worked as a Community Engagement Animator offering public legal education webinars to Black agencies for West Scarborough Community Legal Services.

She is a member of the Anti-Black Racism Task Force of Ontario’s Provincial Planners Institute. She is also a member of Spring Socialist Network; Voices of Scarborough; and a past member of ACORN. Laurie advocates passionately for economic, racial and climate justice, as well as for youth, including her own daughters and grandson. Laurie is pleased to join the CABR’s Partnership and  Accountability Circle and looks forward to learning and helping implement more strategies towards racial equity. 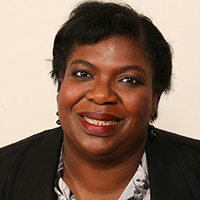 Migdalia Jones currently holds the position of Senior Manager of Employment Programs at Tropicana Community Services-Employment Centre. Migdalia has been actively involved in the employment field in different capacities such as employment counsellor, job coach, coordinator of counselling services and manager of employment programs supporting job seekers of Black, African, Caribbean descent and other racialized communities since 2008.

Migdalia believes in attaining results through strong leadership, professionalism, high standards, accountability, integrity and strong work ethics. She believes in establishing partnerships, seeking employment opportunities for youth and adults and advocating for the success of the Black community she serves.

Currently, she is actively involved in different committees and tables in Scarborough and North York. These are Youth Employment Partnership (YEP) managers group, Toronto North Local Immigration Partnership employment group, and Toronto East Quadrant Local Immigration Partnership Inclusion and Equity Action Group. She holds a Bachelor of Commerce and Office Management from the University of Panama and a Diploma in Career and Work Counsellor from George Brown College. 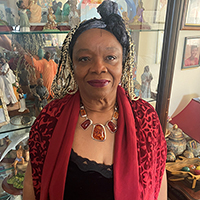 Margaret Nelson is a Registered Nurse by profession and has been in the nursing profession since 1972. Trained in Neonatology nursing at the Hospital for Sick Children, with a specialty in Pediatrics, and Neonatology, she gained experience in Adult and Children Critical Care and Emergency Care. She also worked extensively in Baltimore, Washington DC., South Florida, Los Angeles, and New York. For three years she was a nursing instructor at Humber College.

Growing up in Jamaica as a child, Margaret always looked out and took care of others. She has been involved in community work since 1975 in Canada starting with the Black Education Project (BEP), where she learned about the school system in Canada.

Presently, she is a member of the North Etobicoke Resident Council (NERC). She is also a member of the Local Champions that came out of the Toronto Strong Neighborhood Strategy 2020 (TSNS). In 2019 she obtained a certificate from George Brown College in Human Rights as a part of becoming a Local Champion and remains an active member of the Jamaica Canadian Association and CAFCAN. 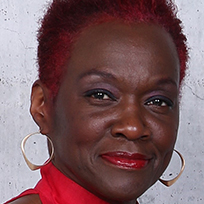 Cecile Peterkin is a popular guest lecturer at colleges and universities, where she helps future graduates plan their careers and prepare for the job market. Without a doubt, she has helped a lot of university and college graduates prepare for their first job

Cecile does not only focus on her career as a coach and mentor. She actively volunteers in various community programs and activities and serves on non-profit boards. She willingly offers free workshops, which are aimed at guiding young women in at-risk communities. She is also a mentor to many young adults in the Toronto area. 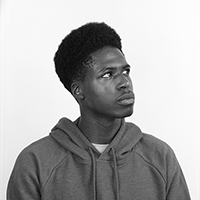 Jide Alaga graduated from the University of Toronto with a Bachelor of Arts in Political Science and Philosophy. He joins the Partnership and Accountability Circle from the public health sector where he specializes in mental health research and policy planning as a junior analyst for Children’s Mental Health Ontario. His main interests are in Humanism, mental health, and effective altruism—an approach to improving well-being through cost-effective, evidence-based solutions. In his free time, Jide also conducts volunteer research on school-based mental health interventions that improve well-being and decrease depression in students. 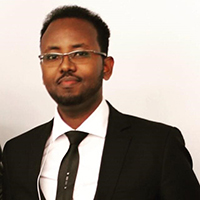 Mohamed Hassan is a Policy and Program Analyst with more than six years of experience in designing, implementing, coordinating, and evaluating social and developmental programs and policies in the public and non-profit sector. He holds a Master’s degree in Public Policy and Administration from Ryerson University. Mohamed brings extensive experience helping organizations design strategies and implement programs aimed to achieve positive impact for causes and communities.

His deep understanding of social issues includes anti-Black racism and Islamophobia, implicit and explicit biases, inferior access to healthcare, and overarching institutional racism. Currently, Mohamed is a program coordinator at Positive Change Toronto Initiative where he is the focal point for innovative program delivery and maintaining strategic partnerships with key stakeholders; he also undertakes proposal development and evidence-based research. He has a passion for the social upliftment of Black communities with a focus on empowering young people with the tools necessary to confront systemic injustices. 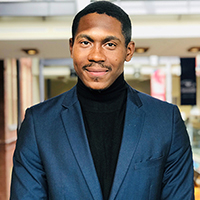 Osivue Itseumah is a first-generation Nigerian-Canadian who centers equity, minority advocacy and creativity in all of his multifaceted endeavours. Given that Osivue was born and raised in Nigeria, and has since gone from an international high school student to a permanent resident that works as a Project Analyst at the Ontario Ministry of Infrastructure, he is very interested in supporting policies and programs that aid immigrants/newcomers in succeeding in Canada.

His diverse interests range from disc jockeying and graphic design to working on innovative projects in his spare time to support access to required goods and services in Black communities. Osivue holds a Bachelors in Political Science & Communications from York University and a Master’s in Public Administration from Queen’s University and has previously supported youth advocacy efforts on a municipal level at the Toronto Youth Cabinet. 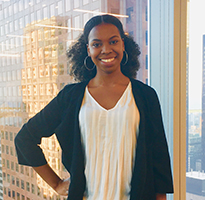 Eki Okungbowa is a Black woman of Nigerian ancestry and heritage born and raised in Toronto (Tkaranto, Treaty 13). She earned an Honours Bachelor’s degree in Psychology from York University, and will soon obtain a master’s degree in educational psychology from the University of Alberta. Eki is passionate about bridging research, education, and policy and leveraging these as advocacy tools for marginalized communities. Her lived experience as a Black youth who grew up in disenfranchised communities within Toronto as well as her previous experience working at the City of Toronto with Black youth have meaningfully fueled her determination to offer a Black youth lens to the work of the Partnership and Accountability Circle.

She has extensive community service experience with grassroots initiatives, community organizations, and federal government advisory committees. She is an advocate for social justice, equity, and sustainable impact, particularly as they apply to confronting anti-Black racism and advancing the inclusion of Black communities. Eki received the 2019 Lincoln M. Alexander Award from the Government of Ontario for her commitment to anti-racism and leadership in eliminating racial discrimination. During her spare time, Eki loves painting, Afrobeat workouts, and long nature walks during sunset. 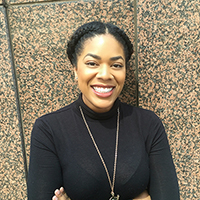 Latisha Cohen is a Black Afro-Caribbean woman, who grew up in Toronto her whole life. She is a lawyer, practicing general corporate commercial litigation. Latisha received her Bachelor’s degree from the University of Toronto, with a double major in equity studies and criminology. Subsequent to her undergraduate studies, Latisha founded a program called Sisters of the Soil, which facilitates solidarity initiatives between Indigenous women and their women of colour allies. Latisha also served as Vice-President on the board of directors of the Native Canadian Centre of Toronto. She completed her JD at Osgoode Hall in 2018. During her time at law school, Latisha was an Executive Director of the Osgoode Indigenous Students’ Association and the Black Law Students’ Association. She also served as the Equity Initiatives Officer on Osgoode’s Legal and Literary Society. Latisha continues to contribute and volunteer in the community and served as a member of the Anti-Racism Advisory Panel to the Toronto Police Services Board. Most important, Latisha is a mother, wife, daughter, sister, and active member of the Toronto Black community. 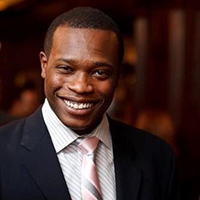 A native to Moss Park in the city of Toronto, Dave McNee is the Principal at Uchenna Academy – Canada’s first Black owned and operated private high school. Dave is also a member of several community boards, including the Toronto District School Board (TDSB) CUSCAC committee, BWXT Nuclear Technologies and is a Chair of The QSLA Foundation, which provides financial assistance for registration fees, scholarships or bursaries to youth aged four to 29, for participation in academically-driven athletic programs.

Dave has facilitated collaborations between Uchenna Academy and University Health Network (UHN) as well as Deloitte Canada, where economics students had an opportunity to learn from the experts in the field and get a unique opportunity to present their product ideas at UHN’s Annual Research Day. He has also spearheaded research initiatives that explore effects of combining sporting activities with mathematics pedagogy, a study which seeks to explore novel ways of engaging youth into mathematics (BallMatics).

Dave is currently busy building a new academic and sports school facility in the old Hamilton Gear Factory, located in the heart of the city. The academic and sports facility will house the Ballmatics programs and become Uchenna Academy’s academic facility, which will provide a place of learning and development in the ever-important fields of STEAM (Science, Technology, Engineering, Arts and Mathematics) for years to come. Dave wishes to further his assistance to the city by serving on the Partnership & Accountability Circle (PAC) and help strengthen Black communities within the city of Toronto. 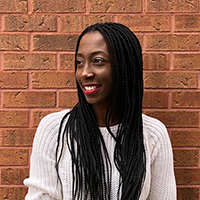 Yanique is Uber’s Public Policy Manager responsible for Western Canada. In her role, she is also focused on the company’s national safety policy including road safety, personal safety, women’s safety, and health safety. Before she joined the tech sector, she served in Canadian politics for more than eight years where she worked to advance policies focused on international trade, rural economic development, empowering Canadian small businesses, gender equality, gender-based violence (GBV), and advising the Government of Canada on how to deliver on its diversity and inclusion commitments.

Yanique enjoys being active with community initiatives as it provides an outlet for her to give back to the community and various organizations that have supported her along her journey. 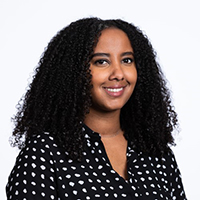 Nura Yunus is an Eritrean-Canadian Muslim Woman born and raised in Toronto, the territory covered by the Dish With One Spoon Wampum Belt Covenant. She currently works in international development with the MasterCard Foundation as Partner, Youth Engagement for West, Central and North Africa. Before this, she worked with various grassroots and non-profit organizations in program design and delivery, community development and workshop facilitation.

Her passion for anti-Black racism has recently led to the creation of the Know Nonsense Anti-Racism podcast, a resource for learning about racial injustice and white supremacy from a Canadian perspective. Nura has an Honours Bachelor of Arts from the University of Toronto and a Post-Graduate Certificate in International Development Project Management. She is thrilled to be contributing her lived experiences as a Black Muslim woman and as a community development professional to the Partnership and Accountability Circle. When she isn’t working on the podcast you can find her reading, watching documentaries, or hiking one of Toronto’s many beautiful parks.