The Minister of Environment, Conservation & Parks has approved the Lawrence Park Neighbourhood Investigation of Basement Flooding and Road Improvements Class Environmental Assessment to proceed to implementation.    Please see the letter issued to the City and decision table.

The City will now review the implementation schedule and update our expected timeline for design and construction of the recommended projects.  As we move forward, we will continue to keep you posted. 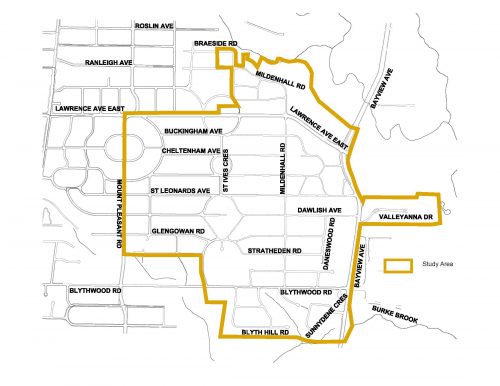 This Study Area is one of the 34 areas in Toronto included in the Basement Flooding Work Plan, approved by City Council to address basement flooding across the City.

A series of public information centres (PIC) have been held from 2013 onward to allow community residents to speak with staff and provide their input at key stages in the study.

Summary of the first Public Information Centre, held on April 22, 2013.

Summary of the second Public Information Centre, held on November 19, 2013.

Traffic and Road Report for the Lawrence Park Neighbourhood.

Summary of the Public Information Centres held in May 2015.

Summary of the last Public Information Centre, held on May 26, 2016.

Following consultation with City Divisions, the public and stakeholders, the City accepted the following study recommendations, which comprise several Schedule A+ and Schedule B projects:

In addition to the above capital works, the study also recommends continued promotion of source control measures such as downspout disconnection and the City’s Basement Flooding Protection Subsidy Program.

The study was carried out following the requirements for a Master Plan under the Municipal Class Environmental Assessment.  A Master Plan report has been completed and has been placed on public record for a 30-day review period starting February 12, 2018 and ending on March 13, 2018. The Master Plan report is available for review at www.toronto.ca/lawrencepark and Locke Library, 3083 Yonge Street.

If you have any outstanding issues with a project in the Master Plan, please address them to the City staff listed below and we will attempt to seek a mutually acceptable resolution.

If concerns regarding a project in the Master Plan cannot be resolved in discussion with the City of Toronto, a person or party may then request that the Minister of the Environment and Climate Change (MOECC) make an order for a project to comply with Part II of the Environmental Assessment Act (referred to as a Part II Order), which addresses individual environmental assessments.

Written requests must be sent to:

If no requests are received by March 13, 2018, the City may proceed with the project as outlined in the Master Plan study report.

To request assistance with any difficulties viewing these documents, call Tracy Manolakakis at 416-392-2990 or Tracy.Manolakakis@toronto.ca.

What is a Class Environmental Assessment?

Ontario’s Environmental Assessment (EA) program promotes good environmental planning by determining and managing the potential effects of a project prior to implementation.

This study is being carried out according to the Municipal Class Environmental Assessment process. This is an approved approach to satisfying requirements of the Environmental Assessment Act specifically tailored to municipal infrastructure. The process includes identifying the problem or opportunity to be addressed, developing and evaluating a range of alternative solutions, providing opportunities for public input and identifying a preferred solution.