November 2020 Update: City staff will be presenting recommendations for this study to the Infrastructure & Environment Committee (IEC) at the December 1, 2020 meeting. A copy of the staff report is available under IEC agenda item IE 18.2. Interested members of the public can arrange to speak or submit comments to the Committee.

The completion of the southeastern portion of the Service Road that would link Doris Avenue and Tradewind Avenue across Sheppard Avenue and east of Yonge Street was first studied in detail in a 1996 Environmental Assessment (EA), followed by an EA Addendum in 1998. In 2013, the study was reopened to address important changes in the study area, including extensive high-rise development in North York Centre.

In the intervening period, various options for connecting Doris Avenue and Tradewind Avenue across Sheppard Avenue have been re-assessed (and presented to both Council and the public) with the objective of improving traffic flow to better accommodate growth in North York Centre and mitigating impacts to private property.

As a result of the review that has been undertaken, this EA Addendum recommends a two phased approach as follows: 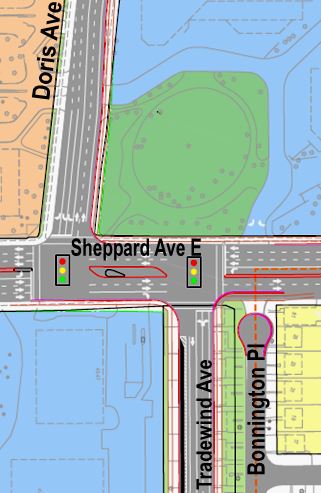 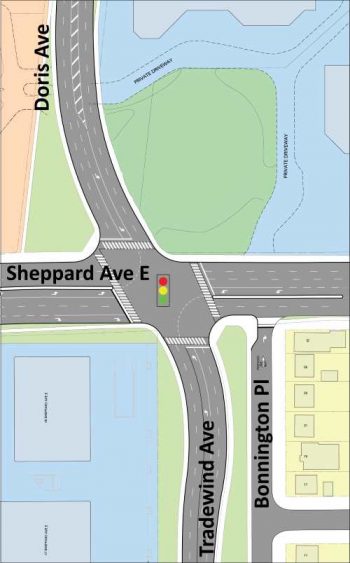 *This final design is a modification following the February 2020 public consultation. Staff refined the Future condition to achieve the following:

This refinement replaces the cul-de-sac on Bonnington Place with a right-out connection to Sheppard Avenue East, subject to detailed design.

Both phases will protect for a four-lane street south of Sheppard Avenue, with two lanes in each direction, sidewalks on both sides of the road and a wider boulevard where feasible.

Implementation Schedule and Next Steps

Should this item be adopted by IEC, and City Council (December 16-17, 2020), the implementation schedule is as follows:

The timing of implementation for Phase 2 has yet to be determined and would be subject to completion of detailed design to minimize impacts where possible, and acquisition of required property.

In June 2014, City Council directed staff to refine Option B to address any deficiencies and then reassess all Options, with priority given to the traffic capacity and operations at the Service Road and Sheppard Avenue East intersection.

Following updated modelling analysis, which also accounted for REimagining Yonge recommendations, Staff determined a single intersection would provide the most improvement for traffic flow in the North York Centre. Although the single intersection is proposed as the future condition, Staff also determined that the interim condition would also improve the overall performance of the future network when compared to the Future Do Nothing Scenario, and could be implemented sooner, at less cost, and with less impact to private property.

From February 14 to March 5, 2020, the project team invited the public to review the updated plans for the new road and provide feedback online. A public drop-in event was also hosted on February 27, 2020.

2015 Simplified Shaded Drawings of the Options

2015 Detailed Technical Drawings of the Options

While we aim to provide fully accessible content, there is no text alternative available for some of the content on this page. If you require alternate formats or need assistance understanding our maps, drawings, or any other content, please contact us at 416-338-2830 or Jason.Diceman@toronto.ca.