The City of Toronto upgraded the existing bicycle lanes on Birmingham Street between Kipling Avenue and Dwight Avenue to protected bicycle lanes (cycle tracks). The project scope included upgrading the pavement markings to add a painted buffer area between the existing bike lane and the motor vehicle travel lane and installing concrete curbs to provide physical separation between people driving or parking and people cycling.

In 2021, the City of Toronto resurfaced Birmingham Street between Islington Avenue and Dwight Avenue as part of the City’s state of good repair program. When a road resurfacing is planned, there is an opportunity for road design modifications to increase safety.

A number of criteria are considered to determine the most appropriate bikeway type for a street to be safe and comfortable for people of all ages and abilities. Based on the motor vehicle volume and speed along the corridor, upgrading the bicycle lanes to cycle tracks is warranted.

Protected bicycle lanes, also called cycle tracks, are lanes for people cycling that are physically separated from motor vehicle traffic. Cycle tracks have been shown to create a safer street for all users including people driving, walking, and cycling. 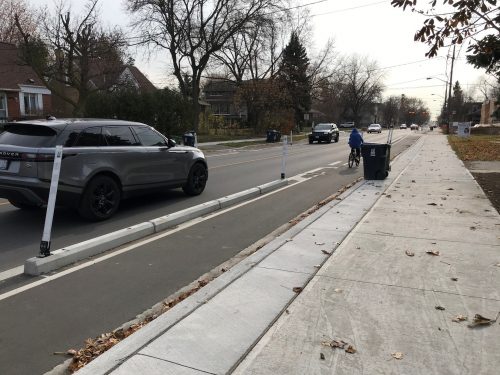 Protected bicycle lane on Willowdale Avenue with curbs and bollards

What Does This Project Mean for You?

If you drive or park on Birmingham Street:

All existing motor vehicle lanes were maintained, but narrowed to encourage greater compliance with the existing speed limit. The existing parking along the north side between Islington Avenue and Dwight Avenue was shifted away from the curb. Approximately five parking spaces were removed to improve sightlines at driveways. Accessible parking or pick-up / drop-off that cannot occur off-street was accommodated within the parking lane or on side streets.

Painted buffers, concrete curbs, and bollards were added to separate the cycle tracks from the motor vehicle lanes. The existing westbound bicycle lane between Islington Avenue and Dwight Avenue was relocated against the north curb, between the parking lane and sidewalk.

If you live in the neighbourhood:

Residents were invited to provide feedback and questions by phone or email by February 19, 2021.