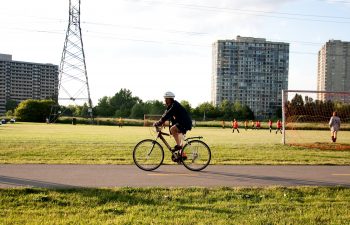 The City of Toronto is planning to build a multi-use trail along the Finch Hydro Corridor from Birchmount Road to Pharmacy Avenue . This trail connection will run 1.6 km within the hydro corridor on the south side of McNicoll Avenue (see map tab).

The trail will provide a safe route for cyclists, pedestrians and other trail users, and establish connections with existing cycling infrastructure, other major multi-use trails, transit, and amenities in the community. It is one segment of the 6.5 km-long Finch Corridor East Trail.

The City continues to work on finalizing legal agreements with utility providers that have infrastructure in the vicinity of the trail.

The time needed to complete these agreements has not been determined and will defer the project until further notice.  Once the agreements have been finalized, the City will issue a Construction Update notice to the public with a revised construction schedule.

In September 2018, the City distributed a Notice of Future Work, outlining plans to move forward with construction of the trail. Since that time, there has been progress on numerous pre-construction activities including archeological, arborist and geotechnical studies.

Currently, the City is reviewing electromagnetic field data and finalizing agreements with utility providers that have infrastructure in the vicinity of the trail. The time needed to complete this work has not been determined and will defer the project until further notice.

A public drop-in event about this project took place on Monday, January 29, 2018 at the L’Amoreaux Community Centre, 2000 McNicoll Avenue.

Members of the public were invited to drop in any time, 7 p.m. – 9 p.m., to view information about the trail, ask questions and speak with project staff.

See the Public Consultation tab for more information about opportunities to provide feedback about this project, including the online feedback survey.

This trail segment will be one part of the larger Finch Corridor trail which, when completed, will stretch approximately 30 km across the north of the city from Norfinch Drive (west of Highway 400) to Middlefield Road in the east. It is a key element of the City of Toronto Bikeway Trails Plan, 2012 and Ten Year Cycling Network Plan, 2016.

In 2011, approximately 13 km of Finch Corridor Trail was completed from Norfinch to Yonge and from Birchmount to Middlefield as part of federal and provincial infrastructure building programs. In 2013/2014, an additional 3 km of the Finch CorridorTrail was constructed from Willowdale Avenue to Pineway Boulevard.

The City’s Ten Year Cycling Network Plan is a comprehensive roadmap and work plan that outlines the City’s planned investments in cycling infrastructure between 2016 and 2025. The Plan aims to build on the City’s existing network of cycling routes by identifying potential cycling network projects that will fulfill the project mandate:

Why is the City building a multi-use trail in the hydro corridor south of McNicoll Avenue?

Trails are actively enjoyed by a wide range of community members for recreation and active transportation.  Multi-use trails provide safe travel routes that allow people to get out into the community – to walk, bike, wheel and rollerblade – and get to know their environment and other people in their area. Multi-use trails support the City’s public health objective of encouraging physical activity in order to improve the overall health and well-being of Torontonians.

This particular trail connection from Birchmount Road to Pharmacy Avenue will allow users to connect with the trail system in L’Amoreaux Park as well as the Finch Corridor East Trail that extends east to Middlefield Road. The trail is one segment of a larger Finch Corridor Trail which, when completed, will extend 30 km. across the north end of Toronto from Norfinch Drive (just west of Hwy. 400) east to Middlefield Road. The Finch Corridor Trail is an identified project within the City’s Bikeway Trails Implementation Plan, (Council approved 2012) and the Cycling Network 10-Year Plan, (Council approved 2016).

What is the design of the trail?

The trail will function as a shared space between a variety of users (cyclists, pedestrians, rollerbladers, etc.) The trail will be 3.5 m wide, paved with asphalt and, pending approval, will include trail amenities such as lighting, waste receptacles and street furniture at entry nodes to ensure user convenience and comfort.

What happens at road crossings?

Along the length of the trail there will be a number of road crossings. Crossing treatments (pavement markings/signals) are an important component in ensuring trail user safety and trail continuity.  At major road crossings (Warden Avenue, Birchmount Road) existing signalized intersections will be modified to allow for a cyclist crossing (includes new bike heads and pavement treatment).  Minor road crossings will be stop controlled.

Will the trail be able to accommodate different users safely?

A number of details will be considered during detailed design to improve the safety of different users including:

Sharing trails helps to build a community in which users cooperate to preserve and protect a common resource. When all trail users observe basic trail etiquette, their encounters with other users will be amicable, and most people will have a satisfying experience on the trail. Trail signage will help promote trail etiquette so that all users are aware of how to use the trail appropriately. Residents are encouraged to call 311 for anything of concern.

How will the trail be maintained?

The City will be responsible for ensuring the trail is well maintained including litter pick-up, grass cutting, pavement repairs, and upkeep of signage.  However, the trail will not be maintained in the winter months (no snow removal).

What will be involved in constructing the trail?

There will be no road closures. Should the temporary closure of a traffic lane be required, at least one lane will remain open.

When will construction start?

The City had initially planned for work to start in Summer 2018, however, construction has been delayed.

Once the timeline for construction has been confirmed, the City will issue a Construction Update notice to the public with a revised schedule.

A Construction Notice with detailed information about the construction of the trail and any anticipated disruptions will be sent to households in the surrounding area two weeks before the work begins.

Will construction restrict the public’s use of the soccer fields at Warden Avenue and McNicoll Avenue?

No. There will be no disruptions to the use of the soccer fields.  Signage will direct the public on how to safely access the fields during construction.

What is Infrastructure Ontario and Hydro One’s role in this project?

The corridor where the trail is being built is land owned by Infrastructure Ontario and managed by Hydro One.  The trail is considered a secondary use on this land. The City, as the trail builder, must abide by regulations of Hydro One for the design, construction and maintenance of the trail and provide for all requirements of the Infrastructure Ontario for approvals. All approvals must be obtained from these agencies before trail construction can occur and a license agreement for easement is granted.

Members of the public were invited to drop in any time 7 p.m. – 9 p.m. to view information about the trail, ask questions and speak with project staff.

If you were not able to attend this meeting, we still want to hear from you! Contact us by phone, mail or e-mail to share your thoughts and questions.