On September 24, 1956, City Council adopted a resolution calling for ‘an open competition…for the design of a civic square and city hall’ on the nearly 13-acre site immediately west of the third City Hall, once a space schedule and other studies were completed. Very clear guidelines were drawn up by Planning Board and the Professional Adviser for the competition, Eric R. Arthur (Professor of Architectural Design at the School of Architecture, University of Toronto). On the very first page Mayor Nathan Phillips promised a competition of exemplary integrity and intent: ‘An eminent jury will select the winner and the City will accept its decision.’ Once published in September 1957 (complete with views, maps and measurements), the year-long competition (in two stages) was open. A registration form included in the Conditions of Competition to give some idea how many might enter drew 1,500 replies within two months! 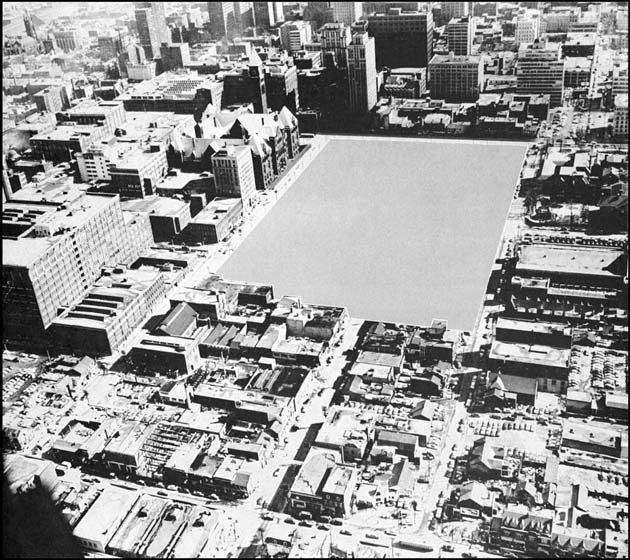 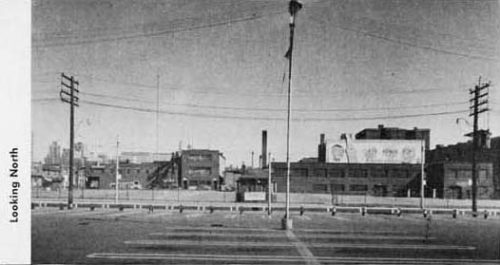 The number of entries in the preliminary competition was awesome: 510 were received (not 520, as generally, and even officially, reported), from a total of 42 different countries, in what was called ‘the biggest architectural competition ever staged,’ by the deadline of April 18, 1958. (In fairness to distant competitors, all contestants had to provide proof that their submission had been dispatched not later than March 28.) The material completely filled the Horticultural Building at Exhibition Place and the jury took six days to reduce this field to eight finalists invited to enter the limited competition.

The seven unsuccessful final submissions showed limited variety in appearance in spite of varied backgrounds. The Danish firm of Haldo Gunnlogsson & Jorn Nielsen submitted a moderately high yet broad tower. Another design called for a slab of more conventional office building scale, by recent American graduate William B. Hayward. The family resemblance among the five remaining contenders was strong: all proposed hollow square buildings with four to eight floors of offices, generally behind metal or light concrete sunscreens. This type had been viewed as ‘very promising’ by the judges because a relatively low, horizontal building placed within the square could stand detached from the buildings around it, achieving an effect of dignity by its simple contrast with its background.

One example came from David E. Horne (an architect of English and Canadian background), who had recently settled in Toronto; it had also served as a master’s thesis. The others were submitted from the United States: by a group of four graduate students, including John Andrews from Australia and Macy DuBois (both of whom came to work in Toronto before the competition was over); by Frank Mikutowski with Rafferty & Rafferty; by Perkins & Will, a well-known firm of the day; and by a team under I.M. Pei, who was Chinese-born, American-educated and only recently established.