Turning on Toronto: Every Modern Convenience

During the late 1880s and early 1890s there was a serious impediment to electric lighting becoming more popular for home use. Apart from the fact that early incandescent bulbs provided a rather harsh light, the main problem was costliness. It cost the homeowner money to buy new fixtures or to convert his existing ones, and early light bulbs burned out quickly.

There was no standardization from one manufacturer to another, leading to bulbs that would not fit in sockets. Gas was cheaper than electricity, and therefore only the wealthy vanguard took up the new-fangled electricity for their homes.

However, by the mid-1890s some of these problems had been resolved, and with decreasing electricity rates, more homes were outfitted with electric lighting. Not everyone could be as extravagant as Henry Pellatt, who reportedly equipped his new home Casa Loma with an estimated 4,000 to 5,000 electric lights in 1913. Nevertheless, in that same year, even blue collar workers who had steady work could afford to switch from gas to electricity.

Henry Mill Pellatt was so enthused about electricity that he had between four and five thousand lights installed in Casa Loma, constructed over a three year period from 1911 to 1914. His castle also had an elevator, of which not many private homes can boast, even today. 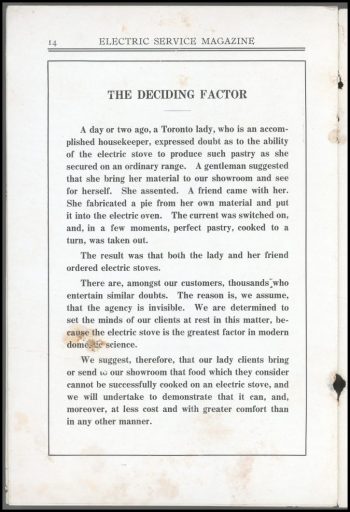 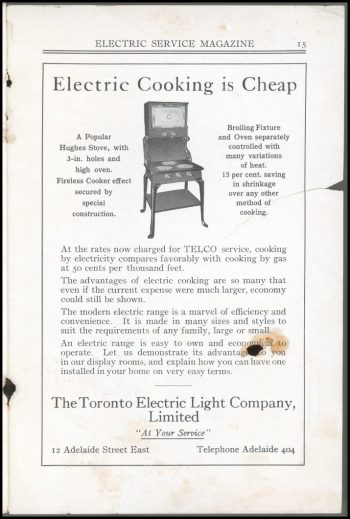 While there was general acceptance of electric lighting in the home by 1900, homeowners proved resistant to embracing the new electric appliances. Curiosity seekers had been exposed to a display of electric irons, kettles, coffee percolators, grills and curling irons by the Royal Electric Company at the Toronto Industrial Exposition in 1893. By 1897, the Canadian General Electric Company was offering many electrical appliances for sale, but for several years the demand remained low.

During its first year of operation, the Toronto Hydro-Electric System saw the opportunity to encourage the use of residential electricity and developed its Appliance Shop. This was a showroom and retail operation located in its head office at 226 Yonge Street and several other branch offices. THES operated their shop to make money, but it had a larger goal of advertising new products to encourage consumers to live in a more “modern” way.

A dizzying array of electrical products is on display in the Toronto Hydro appliance store. Everything from lamps to curling irons to wringer washers could have ended up under the tree on Christmas morning in 1919.

Electric waffle irons, coffee percolators and toasters were among the many modern conveniences desired by smart housewives during the twenties.

Their first success was with the electric iron, selling 5,600 of them in 1914. After the war, they also were able to interest the housewife in electric washing machines, and other labour saving machines, such as vacuum cleaners, floor polishers, toasters and kettles. The twenties also saw great interest in the new “batteryless” radio sets that could be plugged right into the wall.

Edward S. Rogers founded Standard Radio Manufacturing in 1925 to sell Rogers “batteryless” radios which used vacuum tube technology. These radios used electricity for power, and Rogers’ slogan was, “Just plug in, then tune in!” The company was renamed Rogers Majestic Corporation Limited when Rogers merged with the Majestic Corporation of Chicago in 1928. The radios were manufactured at a new factory at Bathurst and Fleet streets, built in 1929. Rogers Majestic was bought out by Philips in 1946.

The electric appliances that had the least appeal were the electric stove and the electric refrigerator. The Consumers’ Gas Company faced little competition from electricity when it came to cooking ranges, since it was a very large investment to buy a new major appliance such as a stove. Similarly, homeowners were attached to their old-fashioned ice boxes, and block ice companies took advantage of the public’s fear of the unknown.

Lake Simcoe Ice and Fuel Ltd. was established in 1876 at Lefroy, near Lake Simcoe. In the last quarter of the 19th century ice harvesting was big business, and Lake Simcoe reputedly had the purest fresh water in Canada. The ice was shipped to Toronto and other cities via rail and then was delivered to customers’ homes just like milk was. The advent of artificial ice-making in the twenties signalled the end of large scale natural ice harvesting. Some people still used ice boxes into the 1950s.

The THES also made little headway in the market of electric heating. Just like today, heating one’s home with gas was much less expensive than with electricity. The Consumers’ Gas Company even increased its sales of natural gas during the teens and twenties since so many people converted from burning coal to gas.

While Consumers’ Gas was a clear loser to electricity when it came to lighting, gas remained an important source of fuel both for home appliances and home heating.

It is one thing to use electricity for lighting or to power appliances, but quite another to use it for heating. The conversion of electrical energy into heat is less efficient than the conversion of fossil fuels into heat, and therefore is much more expensive. This is why most people preferred to use coal or gas to heat their homes.

Gradually, however, the housewife became more convinced by the advertisements for new electrical products and by the annual displays of modern living with electricity at the Canadian National Exhibition. No one wanted to be a domestic drudge and the appeal of greater cleanliness, safety and economy was irresistible. By the thirties and forties electricity came to dominate the domestic scene in almost all aspects.

Sometimes Toronto Hydro took its show out on the road, spreading the word about the advantages of electricity, even during parades.

Next page – Lighting Up the Night