The City is planning to replace TTC streetcar tracks and reconstruct local roads at the intersection of College Street and Dundas Street West. This planned work presents an opportunity for additional safety improvements and enhancement of public space in the project area.

While we aim to provide fully accessible content, there is no text alternative available for some of the content on this page. If you require alternate formats or need assistance understanding our maps, drawings, or any other content, please contact us at 416-392-3074 or downtownconstructionprojects@toronto.ca

The City and TTC have started construction for the TTC track replacement and intersection improvements.

The commenting period for this project has now closed. All feedback received from members of the public and relevant stakeholders through the consultation has been reviewed and considered. The staff report was submitted and the final recommendations were approved at the March 12, 2020, Toronto East York Community Council (TEYCC) meeting.

On Tuesday, November 26, 2019, the City hosted a Public Drop-In Event to share information about the planned road work and proposed improvements, answer questions and gather feedback from members of the public.

The City is undertaking road work in the fall of 2020 at the intersection of College Street and Dundas Street West and a few surrounding local streets. This work will include:

This work is being carried out to bring aging infrastructure to a state of good repair.

As a result of this planned work, the City is considering additional improvements in the project area:

The City has consulted the public on these proposed improvements. Information and presentation slides from the public event are posted under the News & Updates tab on this webpage.

The City would like to develop a long-term vision for the closed portion of St. Helens Avenue that integrates the area currently occupied by the traffic island. However, removal and revitalization of the traffic island could not be incorporated into the work planned for Summer/Fall 2020.

The features that are selected for the closed segment of St. Helens Avenue and installed in 2020 are considered to be ‘interim features’ because they will be reviewed when the City develops a long-term plan for the traffic island.

The City plans to carry out further consultation in 2020 that will engage the public in the development of a plan for removal or revitalization of the traffic island. Some initial ideas for the space include a rain water catchment area and rain garden, decorative seating, and public art.

Road reconstruction is planned for Lumbervale Avenue, St. Helens Avenue and College Street (north segment) in order to bring the infrastructure of these streets into a state of good repair. 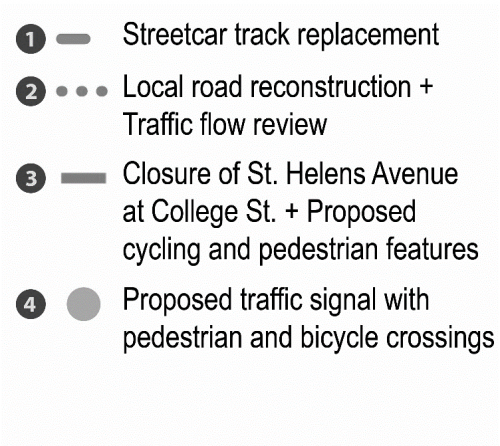