The Power of Place: Artists as City Builders. A Video Blog Series is a series that emerged out of the Manager of Transportation Services, Barbara Gray’s strong interest in the incredible work that is happening across the city by artists supported by the StreetARToronto team, with a focus on highlighting the work being done by diverse Indigenous, Black, and Peoples of Colour artists throughout Toronto. 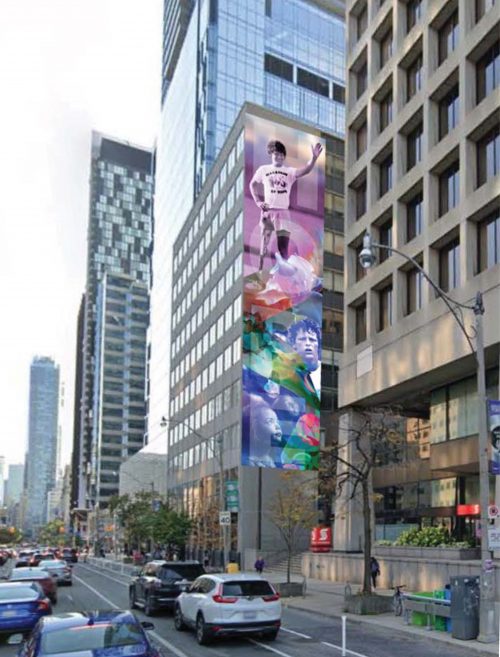 My concept was inspired by Terry Fox’s courage, his message of hope and his continuing legacy.

We see Terry Fox waving at spectators with a big bright smile. I wanted to highlight his prosthetic leg and put this victorious image at the very top of the mural as a symbol of his achievement. A true heroic pose in my opinion. As we move down the mural I have overlaid a subtle ribbon running through the mural to highlight cancer research. The many different colours that run through it symbolize the different types of cancer that the Terry Fox Foundation researches. In the upper part of the ribbon is an Iris flower which symbolizes hope.

The next major image of Terry Fox is of him while running. This is such an iconic photo of him with no quit in his eyes. It shows his courage and his tremendous determination. I wanted to highlight his special relationship with children and included a couple of photos of them gazing and admiring. I think there is a child like that in all of us.

As we move down to the bottom of the mural I have teamed up with Indigenous artist Que Rock. Our styles blend seamlessly and will showcase Terry’s indigenous heritage. There will be a Bison, his journey across Turtle Island, and representation of Courage, Determination and Hope. I’ve chosen a wide range of colours that signify diversity. The colours are slightly desaturated for a more mature, sophisticated look that will look nice with the surrounding buildings.

I have done two variations of the mural. One with the word HOPE that runs through it, subtle yet effective, without taking away from the imagery. It also adds a nice design feel and portrays a powerful message. I’ve added other variations without the text and varying colour schemes as well. I want this mural to be a beacon of hope. I want those who see it to be reminded of Terry’s courage and feel uplifted and inspired, while also being a beautiful addition to the cityscape.

An inter-generational committee which included Terry Fox’s brother Darrell Fox and niece Jessie Alder, with feedback from the public, has selected the artists and design concept that will be painted on the north side of U of T’s Rehabilitation Sciences Building at 500 University Ave. this summer.

Please join the Terry Fox Tribute Mural Advisory Committee, City of Toronto, University of Toronto (U of T) and The Legacy Art Project in congratulating artists Alexander Bacon and Que Rock, whose design concept was selected for implementation!

A signature project of ArtworxTO: Toronto’s Year of Public Art 2021–2022, the City’s StreetARToronto (StART) program has partnered with U of T and The Legacy Art Project to create a mural commemorating Canadian legend and hero Terry Fox.

The large-scale, community-engaged landmark mural will commemorate Fox and support the legacy of his “Marathon of Hope.” Once painted, the mural is expected to cover as many as eight storeys and overlook University Avenue, part of the route Fox followed into downtown Toronto on July 11, 1980 (day 90 of the Marathon) before eventually making his way to Nathan Phillips Square, where he was met by thousands of people cheering him on.

Bacon and Rock’s submission was inspired by Fox’s courage, message of hope and continuing legacy. The mural concept features Fox smiling and waving at spectators while standing in a heroic pose. A ribbon running through the painting acknowledges cancer research with the mural’s colours symbolizing the many types of cancer researched by the Terry Fox Foundation. An image of a bison recognizes and celebrates Fox’s Metis heritage, including characteristics of strength, courage and resilience. An iris flower and the word “hope” running vertically through the design highlight Fox’s most prominent message for the marathon.

The StreetARToronto Richmond St. Cycle Track Mural Project titled ‘Cycling is Elemental’ is complete! Walk it, bike it, or drive by Toronto’s latest outdoor art gallery to experience 353 unique and meaningful murals painted by a diversity of Toronto artists on cycle track barriers from Parliament St. to Bathurst St.

StART and Quiet Streets are collaborating on a pilot project to create meaningful opportunities for artists to express underrepresented voices and facilitate place making and healing during this significant moment in urban history. This initiative will add vitality to the ‘Quiet Streets’ initiative the City of Toronto has introduced to enable physical distancing and encouraging walking and cycling on local streets during the COVID-19 pandemic.

The StART Front Line Heroes Art Project features a new series of street, mural and graffiti art that celebrates Toronto front line service providers including health care and essential workers, volunteers and other heroes responding to the global coronavirus pandemic. Titled “Celebrating Front Line Heroes”, the works represent a diversity of essential workers of all ages, genders, backgrounds and professions from mail carriers and grocery store employees to teachers and sanitation workers, as well as doctors, nurses, and first responders – and all of these works have been painted by an equally diverse group of artists. View the Celebrating Front Line Heroes booklet and join us in celebrating the heroes who are helping us through the global coronavirus pandemic.

Toronto is home to some of the best street art and street artists in the world!

To celebrate Toronto and the outstanding creative talent in Toronto, Micki Moore in collaboration with StART, has launched the ‘Art Over Bridges’ project to engage artists to design and install three dimensional artwork on bridges in Toronto. Art Over Bridges is a transformative new placemaking initiative that adds colour and vitality to neighbourhoods; demonstrates the positive impacts of diversity and inclusion, fosters community engagement; encourages active transportation; and showcases the creativity of artists, arts organizations and the city of Toronto.

At the heart of Micki’s vision is a series of vibrant and high-quality Art Bridges throughout Toronto, beginning with art over the Jameson Avenue Pedestrian bridge. Micki’s placemaking initiative promises to strengthen the connection between people and the places they share through a collaborative process to improve the look and feel of our streets and the public realm.

Your contribution is the spark that will help turn Micki Moore’s impassioned idea into reality. Donate online at DonateTO, then select the ‘Support Cultural Vibrancy’ Initiative and the ‘Micki Moore Art Over Bridges’ program. If you prefer to donate by cheque, please mail your cheque to: DonateTO, 55 John Street, Metro Hall, Floor 14, Toronto, Ontario, Canada M5V 3C6,  Attn: Roy Moniz and write ‘Micki Moore Art Over Bridges’ on the cheque. Thank you.