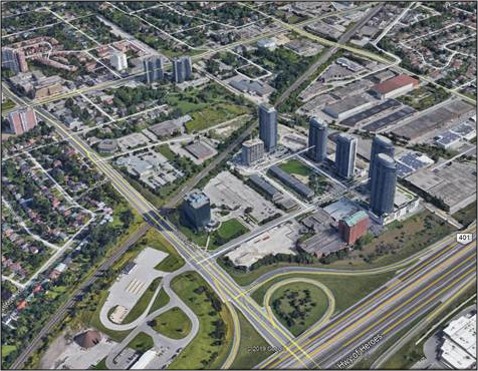 The City of Toronto is studying transportation connections from Village Green Square to Sheppard Avenue East and the Agincourt GO Station. Transportation infrastructure improvements are needed to ensure people can drive, walk, and cycle to destinations safely and efficiently, and support the growing number of people living and working in this area as well as planned developments.

If you were not able to attend, you can view the materials that were presented at the event:

The study area is bounded by Cardwell Avenue to the north, the Stouffville GO train line to the east, Village Green Square to the south and Kennedy Road to the west. Several infrastructure improvements are being recommended within the study area. 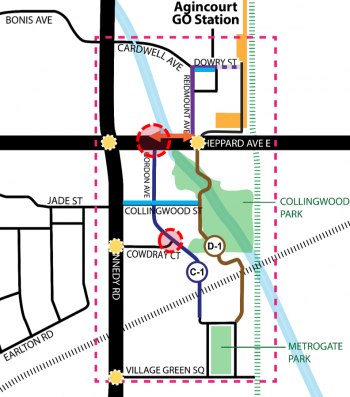 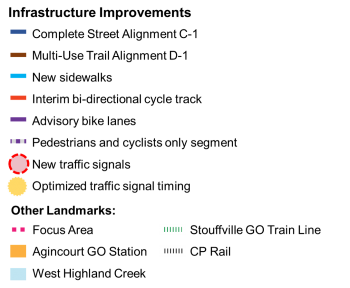 The transportation improvements being recommended through this study include:

Design options for the new north-south ‘complete street’ have been evaluated. On Gordon Avenue, the recommended design includes:

On the new section of the ‘complete street’ south of Collingwood Street, the recommended design includes:

The lands between Highway 401 to the south, Kennedy Road to the west, Sheppard Avenue East to the north, and the Stouffville Metrolinx GO rail corridor to the east are experiencing significant development growth. The number of people living and working in this area will grow as a result of planned and anticipated developments.

As the number of people using the transportation network increases, improvements will be needed to ensure that people can travel through the area and reach key destinations efficiently and safely. Without alternative routes, particularly to and from the Agincourt GO Station, increased traffic from anticipated developments will lead to greater congestion. The need for a new north-south street connecting Sheppard Avenue East with the streets east of Kennedy Road is identified in the City’s Official Plan and the Council-approved Agincourt Secondary Plan.

Key objectives of the study:

Constructed and natural barriers in the area present a number of challenges. The transportation network is constrained by the Canadian Pacific Railway, the Stouffville Metrolinx GO rail corridor and West Highland Creek, resulting in a disconnected local street network that limits the movement of people in the area.

Currently, people travelling to and from Cowdray Court and Village Green Square must use Kennedy Road. Given that congestion on Kennedy Road is an existing concern, as is the safety of people walking and cycling, this study aims to address existing and future needs for all modes of transportation.

Under this process, the study will:

Each potential transportation improvement (solution) will be assessed based on its anticipated impacts on the natural environment, traffic circulation, residents and property owners in the study focus area and the surrounding area, upfront and long-term costs.

An Environmental Study Report (ESR) will be prepared and made publicly available at the end of the study process in accordance with the requirements of the Municipal Class EA. Members of the public will have a 30 day period to comment on the ESR.

The study was initiated in June 2020 and is anticipated to be completed by early 2023.

Public Consultation: What We Heard

In September 2020 the City of Toronto consulted the public on the potential transportation improvements being considered through this study. While some local residents are supportive of a new street and new multi-use trail connecting Village Green Square with Sheppard Avenue East, many residents have significant concerns about the potential impacts of these projects.

The Consultation Summary report provides a full summary of the feedback received from the public and key stakeholders through the first round of consultation. This feedback is being considered by the project team as part of the detailed evaluation of each transportation improvement option.

Following the second round of consultation, an Environmental Study Report with the final recommended improvements will be prepared, and the study recommendations will be presented to City Council for consideration.

The first Virtual Public Event was held on September 23, 2020, to introduce the study, present the transportation improvement options that are being considered, and respond to questions from the public.

The Agincourt Mall site falls within the secondary study boundary, and the proposed redevelopment of the mall will be considered as part of the broader impact analysis (e.g. impacts of the potential transportation improvements on traffic and the natural environment). Additional traffic that could be generated by the Agincourt Mall redevelopment will be considered as part of traffic modelling that is used to evaluate potential transportation improvement options.

The dedicated cycling facilities (separated bike lanes) that are recommended along the complete street have a different purpose than the multi-use trail. The dedicated cycling facility on the complete street is intended as a direct route for people cycling between destinations,  and would be well lit at all times of the day, and maintained during the winter. In contrast, the multi-use trail is intended more for recreational purposes since it takes a more leisurely route through Collingwood Park and would be shared with pedestrians and other recreational users. In addition, the multi-use trail would not be as well lit during the evening periods and may not be cleared of snow during the winter. The combination of both the on-street cycling facilities and recreational trail would increase the active transportation resiliency and connectivity through the study area.

Sidewalks are an important piece of infrastructure that improves safety and accessibility in our city. The City is recommending to build sidewalks that are 2.1 metres wide wherever possible to meet the City’s standard. A 2.1 metres wide sidewalk would allow two people using mobility devices (e.g. a wheelchair, or stroller) to pass each other at the same time.

In most cases, new sidewalks are being recommended within the City’s right-of-way, which is the publicly-owned portion of the street, with no impact on private property. However, in some locations, the portion of driveways and landscaped areas that falls within the City’s right-of-way would be shortened to make room for a new sidewalk, and affected property owners would be notified of the changes in advance.

As part of the recommended changes within the study area, a number of changes to on-street parking are being proposed:

The City’s Cycling Network Plan includes Sheppard Avenue as a major city-wide cycling route, but further study is required to determine the design of the permanent cycling facilities in the segment of Sheppard Avenue East within the study area. To create a safe cycling connection between Agincourt GO Station and the neighbourhoods south of Sheppard Avenue East, an interim two-way cycle track is recommended.

Advisory bike lanes are recommended on Reidmount Avenue and the west segment of Dowry Street due to the low traffic volumes on these streets and the need to create defined space for cycling. There would be painted bike lanes on both sides of the street, one centre driving lane, and restricted on-street parking on one side. A driver travelling in either direction would use the centre driving lane but may drive in the bike lane to pass an on-coming vehicle.

The recommended alignment of the multi-use trail (D-1) would follow the path of the existing pedestrian bridge across West Highland Creek and the existing trail leading to the park entrance at Collingwood Street. It would then continue south along the western edge of the park. Outside of the park, the trail would turn south-east to cross an existing CP Rail opening before continuing south to connect with the cul-de-sac along Village Green Square. The impact of the multi-use trail on Collingwood Park would be minimal.

Some of the transportation improvements that are being recommended would involve impacts to residential and commercial properties. In some cases, the potential impact is to the City-owned right-of-way in front of properties, where in other cases, there is the potential for impact to private property.

The owners of properties that are potentially impacted have been notified directly by the City of Toronto.

The level of noise generated by the projected increase in traffic volumes along Gordon Avenue and Collingwood Street resulting from the study recommendations will be evaluated as part of the study, based on requirements established by the Ministry of Environment, Conservation & Parks. If our assessment shows that the anticipated noise exceeds thresholds established by the ministry, then mitigation measures will be evaluated and proposed. However, based on the level of traffic volume projected, this is not expected to be the case.

This study has taken a balanced approach to improving safety while mitigating the impact of traffic congestion. The existing signals and recommended signals along Sheppard Avenue East would be coordinated, meaning they would be synchronized to minimize the impact of closely spaced signals.

Traffic modelling that took into consideration future population growth in the area was used to evaluate the impact of each street alignment option on future traffic volumes. The recommended Complete Street Option C-1 performed better than the other alignment options and demonstrated the most benefit to the overall road network.

Overall, we know that the intersection of Kennedy Road and Sheppard Avenue East is at capacity now. As new development comes to the area, congestion will worsen if improvements are not made in the study area, and if safe and convenient routes for walking and cycling are not provided.

Following the second round of consultation, the final study recommendations will be presented to the Infrastructure & Environment Committee, and City Council for consideration. If approved by Council, an EA study report will be made available to the public for a 30-day review period.

The Project Team is working towards developing Construction Phasing and Timelines for each recommendation, which will be included in the final Environmental Assessment report. Implementation timelines of many of the recommendations would be influenced by ongoing private development in the study area, such as the development of the Cowdray Court lands.

Need assistance?  While we aim to provide fully accessible content, there is no text alternative available for some of the content on this page. If you require alternate formats or need assistance understanding our maps, drawings or any other content, please contact us at 416-395-7243 or email Ryan.Lo2@toronto.ca.