The William P. Hubbard Race Relations Award was established in 1987 and is named after the first person of African heritage to serve as a Toronto City Councillor. William P. Hubbard entered politics in 1894 and served for a total of 15 years. He was Acting Mayor in 1906 and 1907. He was an advocate of public ownership of the hydroelectric system and during his political career worked towards the founding of Ontario Hydro.

This award celebrates the achievements of Toronto residents who work, often without recognition, to challenge racism and support a more harmonious city. Their dedication and commitment has improved the quality of life for all in the City. The public acknowledgement of the work of the recipients serves to encourage others to become actively involved in the elimination of racism. 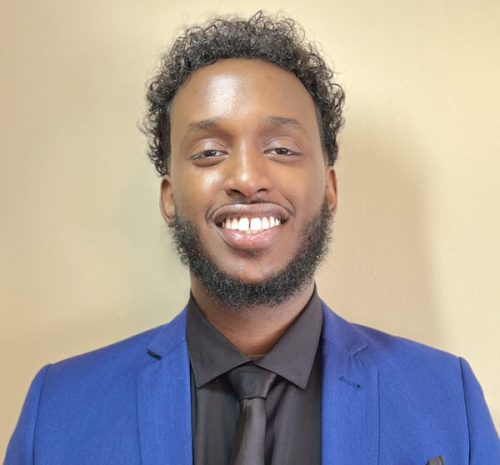 Abdifatah Hussein is a community organizer, activist and spoken word artist from Scarborough with a deep passion for creating platforms and connections within his community. Empowerment drives Abdifatah’s efforts and is the bedrock of Hidaayah House, a collaborative movement and organization that he co-founded. Through Hidaayah House, Abdifatah works tirelessly to combat systemic discrimination, address gun violence prevention and community safety, and support Toronto youth facing multiple barriers. Hidaayah House events bring youth from priority neighbourhoods together into a safe, healing space that utilizes the arts to raise awareness on social issues.

Abdifatah also serves as the inaugural project coordinator with the Urban Alliance on Race Relations Black Youth Fellowship, a professional and leadership development program focusing on building the next generation of Black public servants. In this role, he fostered an inclusive and safe space for fellows to share their experiences and learn. Abdifatah has turned negative experiences into positive accomplishments, becoming an advocate for human rights, criminal justice, racial injustice, and free speech to protect the civil liberties of the Black Canadians. As a role model, he ensures that racialized youth and young adults across Toronto can achieve their goals and has helped maintain a thriving community.

The award is open to residents of Toronto or non-profit organizations that provide a program or service for Toronto residents. Eligible candidates include those who have not attained a high profile within the community or professionals in the field.

The award is presented to a Toronto resident or non-profit organization whose outstanding achievement and commitment has made a significant contribution to challenge racism and support a more harmonious city.