How did we get here? Find out how the Recommended Design Concept was developed on the Background page.

Need assistance? While we aim to provide fully accessible content, there is no text alternative available for some of the content on this site. If you require alternate formats or need assistance understanding our maps, drawings or any other content, please contact us at yongetomorrow@toronto.ca or 416-338-6866.

The Recommended Design Concept is composed of a physical design, for which Environmental Assessment (EA) approval is being recommended, along with a flexible operations approach that is not tied to the physical design.

The Recommended Design Concept proposes a consistent, yet flexible road design that can accommodate different operations and programming. The following design elements are consistent for the full length of the focus area from College Street to Queen Street:

The typical cross section from Gerrard Street to Queen Street is more constrained at 20 m. From College Street to Gerrard Street, the right-of-way is six metres wider than the rest of the corridor. The character of the adjacent properties is also less tourism and entertainment-focused. Cycle tracks, which provide links between the existing cycling facilities on College Street and Gerrard Street are recommended for this section.

The roadway and streetscape would look and feel the same and the road and streetscape design can accommodate Pedestrian Priority, One-Way or Two-Way operations from College Street to Queen Street.

Flexibility was identified as a key priority during the study. The physical design recommended for construction as part of the EA process does not “lock-in” the future operations of any block. Operations can be adjusted based on the future needs of downtown Yonge Street. 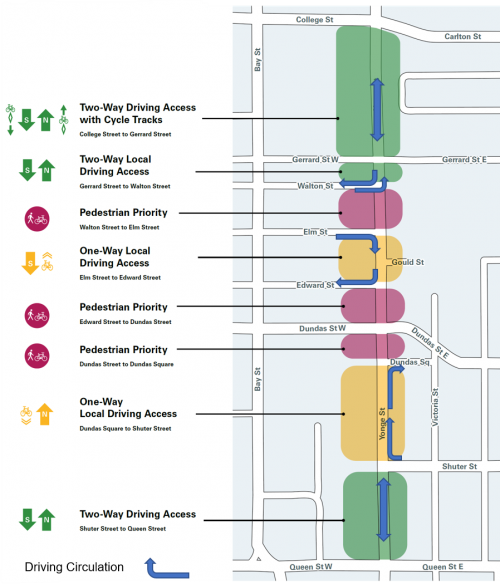 While the design of the street recommended through the YongeTOmorrow EA process would be consistent for the entire stretch, the study also evaluated various traffic operational strategies and proposes a flexible approach that would change the way the street functions from day to night.

During the day, from College Street to Queen Street, Yonge Street would be a place focused on the movement and experience of people walking, cycling, and connecting to transit, rather than way to get through the downtown core by driving. Driving circulation during the daytime would provide vehicle access to support parking garages, loading, deliveries, ride hail, tour buses, Wheel-Trans and municipal services while maintaining a pedestrian-focused streetscape.

The one-way driving blocks provide daytime access for those visiting or servicing a local property by car or truck, while keeping traffic volumes low to support a pedestrian-friendly atmosphere. This extends the character of pedestrian priority blocks while accommodating local driving access.

This operational recommendation is subject to further consultation and refinement throughout the detailed design process. Prior to construction completion, a report would be brought forward to Infrastructure and Environment Committee recommending bylaw and traffic operational amendments necessary to implement an operational approach. As with all operational initiatives, the street would continue to be monitored and further adjustments could continue to be made as needed to maintain effective street operations.