The City of Toronto is urging all road users to stay alert and obey the rules of the road as daylight saving time ends at 2 a.m. on Sunday, November 7.

The return to standard time means fewer daylight hours and reduced visibility for all road users in the evening. In Toronto, pedestrian collisions increase by more than 30 per cent during the evening commute hours from November to March.

To draw attention to the increased risks facing people walking and cycling, the City has launched a city-wide public education campaign that promotes road safety, as we enter a season with reduced daylight hours. The campaign intends to remind Torontonians, especially drivers, to be aware of each other as they share the city’s roads.

The campaign, which will run throughout the month of November, is featured on billboards, at transit shelters, on radio, and in print and social media ads. The campaign will also appear in high-volume parking garages throughout the city.

When visibility is reduced, people and objects on the road are harder to see. The City is asking drivers to follow these safety tips after daylight saving time ends on November 7:

The TTC is also continuing to communicate with operators and supervisors about weather and sunlight changes, seasonal road conditions and potential blind spots. Operators are reminded regularly about safety protocols and how to best protect themselves and their passengers. The TTC is also using social media to share safety information with customers, reminding them to be extra vigilant while boarding, exiting or approaching transit vehicles.

More information about the campaign is available online.

The City continues to implement Vision Zero programs and initiatives to improve road safety and increase healthy and equitable mobility for all road users. These include:

The Vision Zero Road Safety Plan is a comprehensive action plan that aims to reduce traffic-related fatalities and serious injuries on Toronto’s streets. With more than 50 safety measures across seven emphasis areas, the plan prioritizes the safety of Toronto’s most vulnerable road users: schoolchildren, older adults, pedestrians and people cycling. More information on Vision Zero programs and initiatives is available at www.toronto.ca/VisionZero.

“While driving safely must be a priority regardless of the time of year, I’m urging all drivers in the city to eliminate distractions and stay focused as we turn back the clocks this Sunday. At the same time, we are continuing to introduce more Vision Zero road safety measures to help protect residents across the city including lowering speed limits, redesigning streets and intersections, and increasing traffic enforcement.”

“We are entering a period with fewer daylight hours and reduced visibility on our streets. Whether you drive, cycle or walk, please give yourself extra time and travel with caution. Drivers should check headlights and signal lights, turn carefully, obey speed limits and share the road.”

“Our data show that collisions increase when we return to standard time, putting the lives of pedestrians and people cycling at risk. We’re launching this public education campaign to remind drivers to take extra care when travelling in dark conditions and be mindful of other road users sharing the road.” 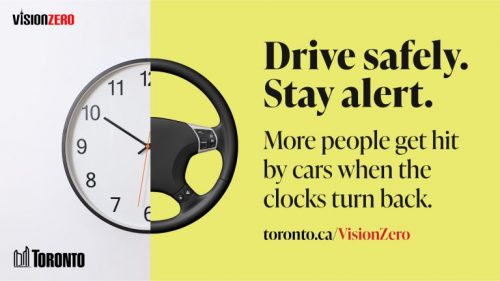 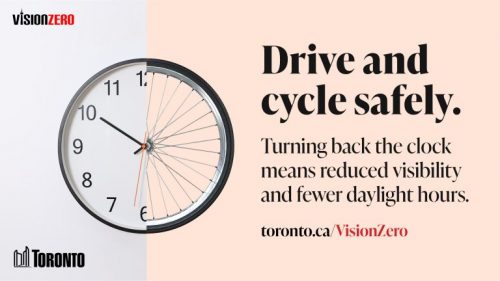