The City of Toronto’s Solid Waste Management Services Division, working with Enbridge Gas Inc., has installed infrastructure at the Dufferin Solid Waste Management Facility that will allow it to create renewable natural gas (RNG) from Green Bin organics. The new equipment will enable the City to take the raw biogas produced from processing Green Bin organics, turn it into RNG and inject it into the natural gas (NG) grid for City use.

The City has also identified potential biogas/landfill gas upgrading opportunities at several other City waste facilities including the Disco Road Solid Waste Management Facility, Green Lane Landfill, and Keele Valley Landfill. All four sites combined would have the potential to produce enough gas to fulfill the City’s entire natural gas needs annually (excluding City Agency, Boards and Commissions). The next facility to receive RNG infrastructure will be the Disco Road Solid Waste Management Facility, with plans to have this site up and running by the end of 2023.

The City’s path to RNG

The City’s existing and closed landfill sites and anaerobic digestion (organics processing) facilities are some of the largest producers of biogas and landfill gas in Ontario. As a result, the City’s Solid Waste Management Services Division has been exploring opportunities to harness the green energy potential of these gases.

In 2015, the Division identified RNG as a top priority for biogas management and started to search for technologies and partnerships to upgrade its biogas and landfill gas to RNG. When looking at the different technologies and options for upgrading and transporting the gas, the Division took a triple-bottom-line approach that considered the economic, social and environmental benefits.

The City has been working with Enbridge Gas Inc. to create and realize the vision for the project at the Dufferin Solid Waste Management Facility. This includes the design and construction of the facility, as well as its operation and maintenance for the first 15 years.

Biogas upgrading helps achieve the goals of the City’s TransformTO Climate Action Strategy, specifically the goal of becoming net zero by 2050 or sooner and the goal of generating 1.5 million gigajoules of energy from biogas by 2030. It also supports the Net Zero Carbon Plan for City Buildings and the City’s Long Term Waste Management Strategy and aim of becoming the first city in Ontario with a circular economy.

*The City is currently reviewing all available green energy technologies for landfill gas utilization.**Based on City consumption only (excludes ABCs)

The benefits of RNG

While chemically identical to traditional fossilized natural gas, RNG is a renewable resource that can be produced using materials that are readily accessible through the City’s Green Bin organics program and does not require mining or drilling activities.RNG is also more environmentally friendly than fossil fuels such as diesel. Once injected into the natural gas pipeline, it can be used to fuel vehicles or provide electricity or heat.The production of RNG from biogas has the environmental benefit of closing the carbon loop by capturing the biogas produced instead of flaring/burning it off, upgrading the biogas to RNG pipeline quality, and then using it to displace a fossil fuel with a renewable green fuel.RNG generated from food waste is considered carbon neutral, if not carbon negative, because the reduction in emissions by not extracting and burning petroleum-based fuel, and the emissions avoided by not sending organics to landfill, exceed the direct emissions associated with the production and use of RNG. While compressed natural gas is 20 per cent better than diesel, RNG is 100 per cent to 120 per cent better.

The City collects approximately 170,000 tonnes of organic material through its Green Bin Organics program each year. The City has two state-of-the-art organics processing facilities – Disco Road and Dufferin  – that use innovative pre-processing and anaerobic digestion technology to break down organic material. The Dufferin Organics Processing Facility is one of the first full-scale anaerobic digestion facilities to operate in North America and was recently expanded to increase its processing capacity from 25,000 tonnes to 55,000 tonnes of organic material per year.Once at an organics processing facility, Green Bin material is unloaded onto a tipping floor. From there it is pre-processed to remove the plastic bags and contaminant materials from the organics. The remaining material is sent to anaerobic digesters, where micro-organisms in an oxygen-free (anaerobic) environment break down the material to produce digester solids (which can be used to create high-quality compost) and biogas.

Both biogas and landfill gas can be upgraded to create RNG. The biogas produced through anaerobic digestion is made up primarily of methane, but also includes carbon dioxide, oxygen, nitrogen, water, sulphur and various non-methane organic compounds.

Biogas upgrading involves purifying the gas to remove carbon dioxide and other contaminants. The result is a gas that is more than 90-per-cent methane and can be injected directly into the natural gas distribution grid. Biogas at the City’s anaerobic digestion facilities is currently flared (burned), which is common industry practice for managing biogas, but does not take advantage of its renewable energy potential and is harmful to the environment. 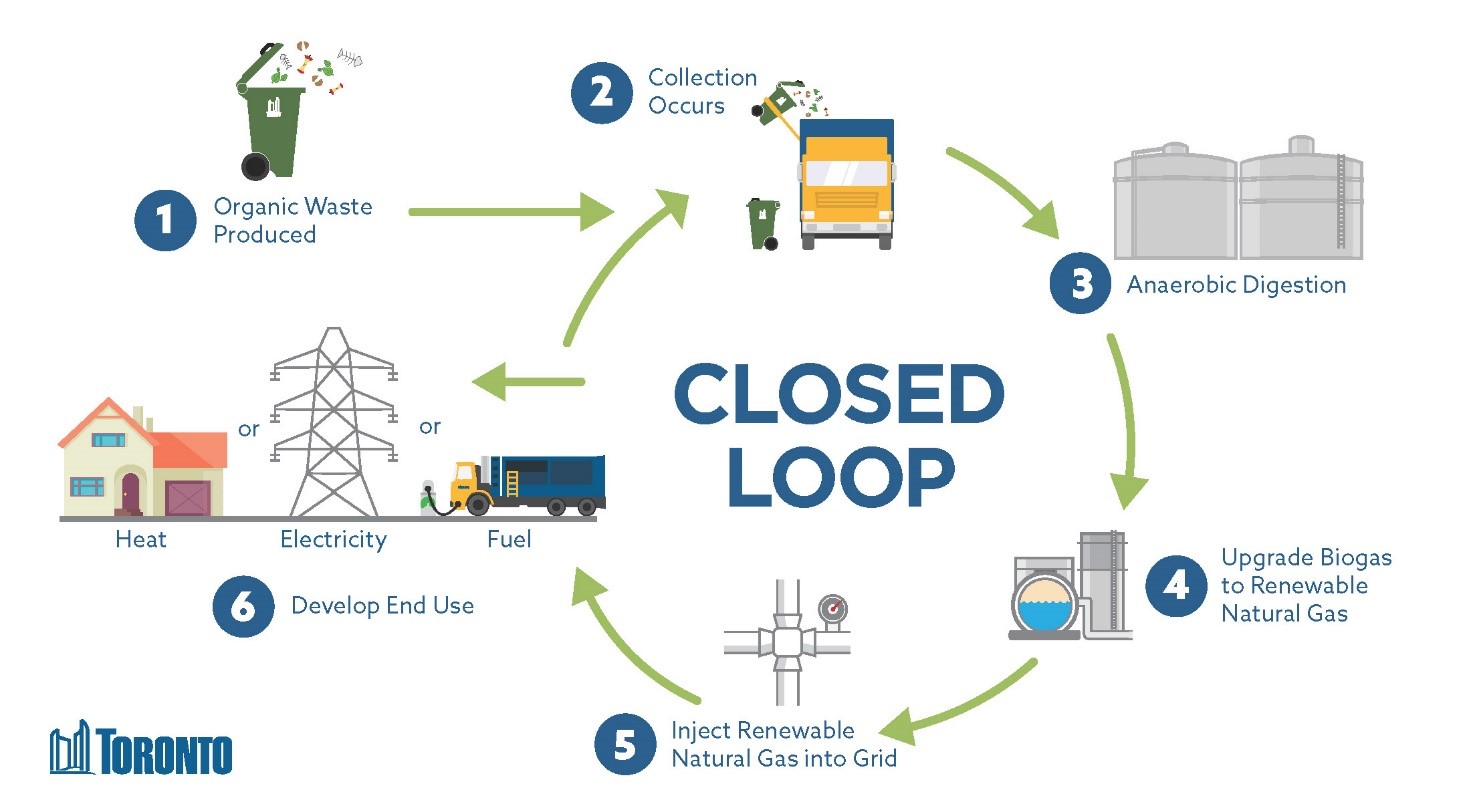