A Stitch in Time

Many readers will be familiar with panoramic photographs. Modern digital cameras make it easy to capture wide vistas, and if the photographer is technically proficient some breathtaking views are possible.

It is perhaps not so well known that the incentive to create panoramic photographs goes all the way back to the earliest days of photography in the 1840s. The impulse stems from the desire to have a photograph which shows a field of view that approximates, or is even greater than what can be seen by the human eye. The technology of panoramic cameras really took off in the late 1880s, and many examples of these early photographs exist to this day. Popular subjects for panoramas were large groups of people, such as sports teams or military regiments; natural wonders, such as Niagara Falls; and examples of the built environment, such as bridges, large buildings, and skylines.

Panoramic photographs are characterized by their shape. They are much wider than they are high, with the width being two to three (or more) times greater than the height. They are also sometimes plagued by distortion, which is particularly noticeable when the subject of the photograph contains straight lines. These lines appear curved because the image was captured by the camera on a curved film plane, but is viewed flat in the printed photograph.

A photographer who didn’t have the specialized equipment to take true panoramic photographs, but who still wanted to record a wide perspective, could take two or more photographs in a row which would then be viewed side-by-side. There are many examples of such “panoramas” in the Archives collection. 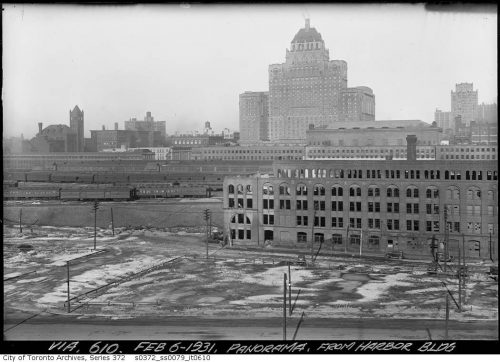 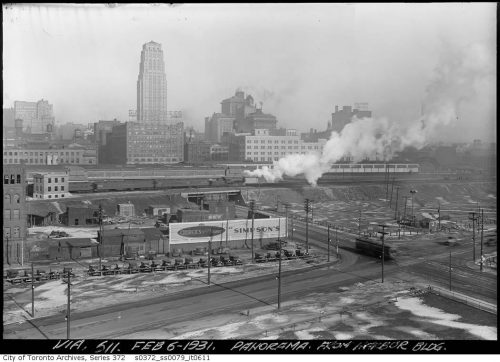 These linked, but not joined, photos offered a challenge to one of our researchers, who decided to use modern technology to stitch the photographs together. He used the software called PTGui to meld together images that he found while searching through our database. The stitching is not always seamless, since the images often have different exposures, or were taken with the camera tilted at varying angles. The area of overlap can also be problematic, and sometimes that part of the stitched photo is a little fuzzy. Nevertheless, it is fascinating to see the pictures brought together. The following are some examples of the work done by this technical whiz. Enjoy!

This view looking north from the roof of the Toronto Harbour Commission building at 60 Harbour St. shows the Royal York Hotel, the Cobben Building (where the Air Canada Centre is now), and a streetcar at the intersection of Fleet St. (now Lake Shore Boul.) and Bay St. 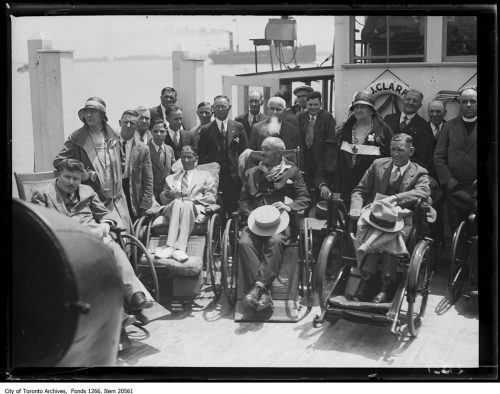 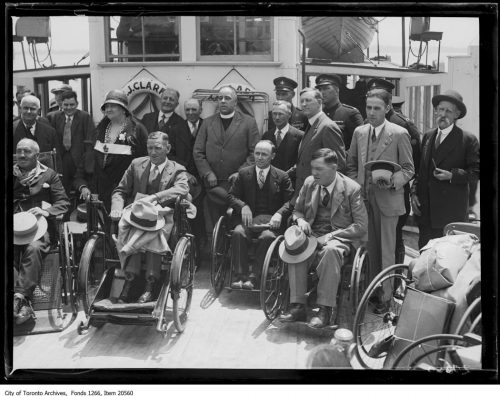 The Toronto Military Orthopedic Hospital, located at Christie St. and Lambertlodge Ave. was popularly known as the Christie Hospital. In this view veterans are on an outing to Toronto Island on the T.J. Clark ferry. 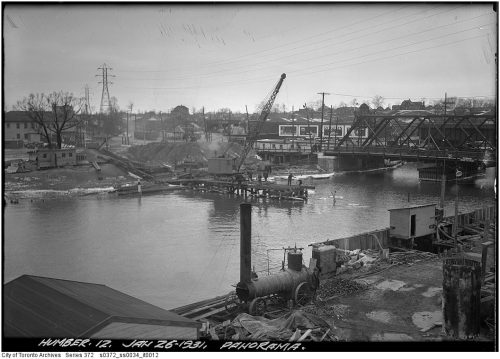 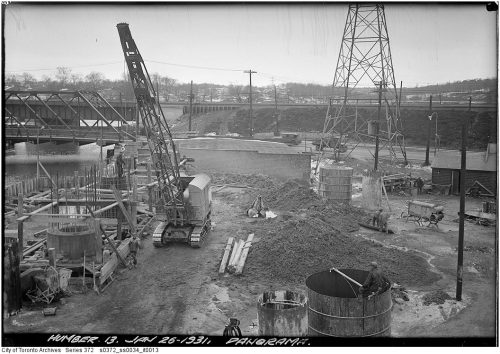 Construction progress views are very common in the Archives’ collection of public works photographs. These ones show the construction of a bridge over the mouth of the Humber River, Jan. 26, 1931. 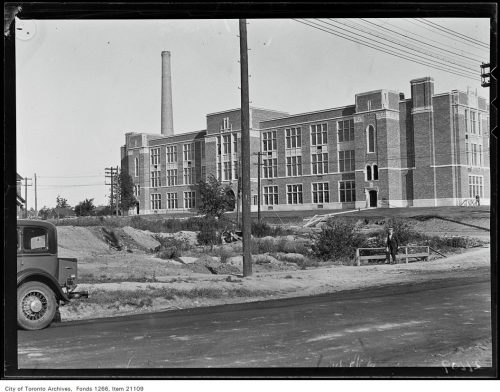 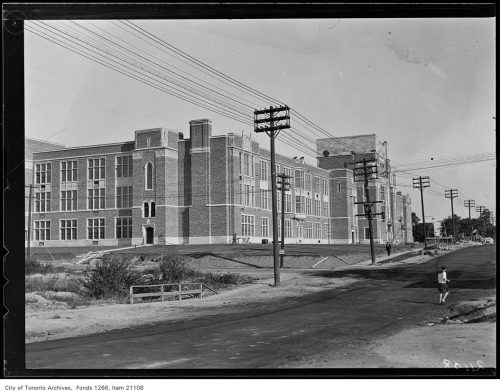 North Toronto Technical School, Jul. 14, 1930This image cannot be purchased from the Archives.

This school is Northern Secondary High School, located to this day at 851 Mount Pleasant Rd., north of Eglinton Ave. 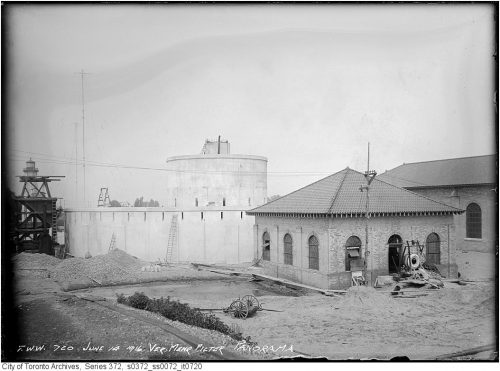 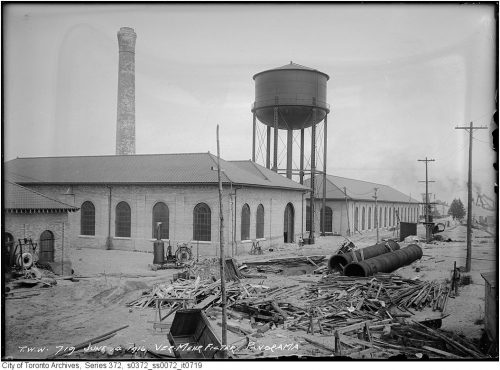 Ver Mehr filter panorama from coal pocket, Jun. 14, 1916This image cannot be purchased from the Archives.

The Ver Mehr water treatment plant was located on Toronto Island, not far from the Gibraltar Point lighthouse. It was a mechanical drifting sand filter plant, with a capacity of 273,000 cubic metres of water per day. It went into service in 1917 and was replaced in 1977. 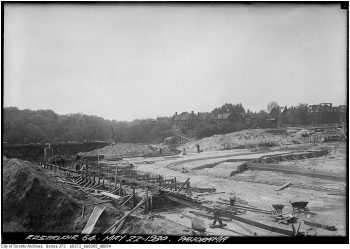 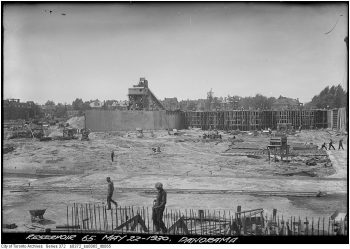 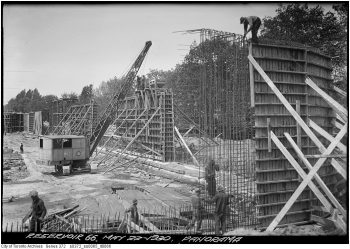 The St. Clair Reservoir is located at the south-east corner of Spadina Rd. and St. Clair Ave., underneath Sir Winston Churchill Park. 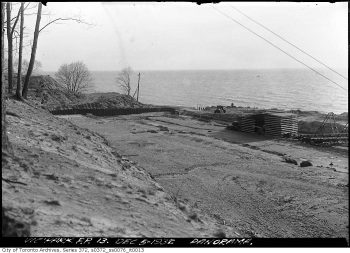 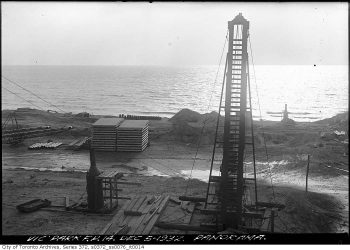 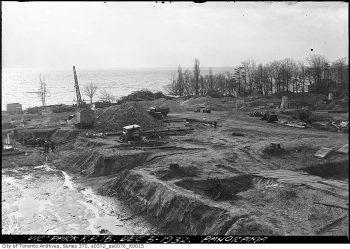 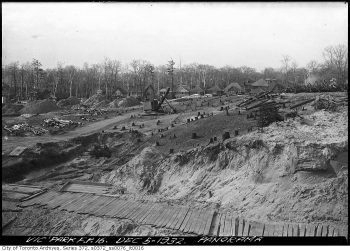 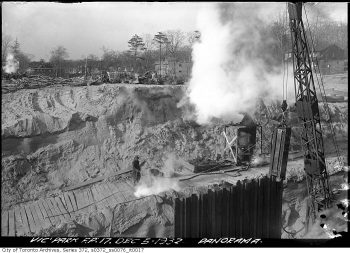 This water filtration plant, located at the foot of Victoria Park Ave., was re-named the R.C. Harris Water Treatment Plant after the City’s long-serving Commissioner of Public Works.