HerStory pays tribute to some of the incredible women who have made or are continuing to make important contributions to Toronto’s history and story. With their talents, skills, determination and perseverance these inspiring women have woven together a more equitable future for us all.

The questions from the floor were mostly directed to me because of the fact that I was a woman and the issue was family reunion… I feel very lucky that I had the opportunity to be out front as an official spokesperson. Women have always had to be too much in the background.

The first Chinese Canadian woman and first restaurateur inducted into the Order of Canada, Jean Lumb advocated for the end of immigration policies that had separated families for decades. Born Toy Jin Wong, Jean’s activism and dedication were no small feat. Despite the considerable responsibilities of running the Kwong Chow Restaurant with her husband and raising six children, Lumb held leadership roles in her community. She campaigned to end the total erasure of Toronto’s first Chinatown and played a pivotal role in challenging immigration restrictions that prevented family reunification among Chinese Canadians separated by 24 years of exclusion. She was the sole woman to participate in the delegation to Prime Minister Diefenbaker. 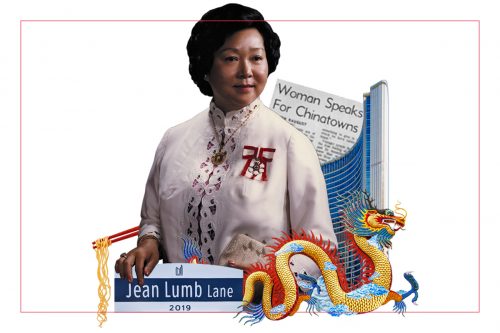 Among her other many contributions, she served for 25 years as the president of the Women’s Association of the Toronto Chinese Community Centre, as a founding director for the Yee Hong Chinese Nursing Home, established business and restaurant associations, and founded a dance troupe. She was also the first Chinese Canadian woman to serve on the boards of Women’s College Hospital, Mt. Sinai Hospital, and University Settlement House, among others.

Lumb’s vision and drive powered her to break glass ceilings in a line of many other firsts: Notably, the restaurant industry recognized her with the Fran Deck Award, the first Chinese restaurateur and first woman recipient. The recipient of many other awards and distinctions, she was proudest to be the first restaurateur and Chinese Canadian woman inducted into the Order of Canada.

In fighting racism and advocating for self-representation of Chinese Canadians, she fulfilled her lifelong dream of cross-cultural connections and integration into Canadian life. Her legacy lives on through the Jean Lumb Foundation’s national scholarship program, an Ontario Heritage Trust provincial plaque in Old Chinatown, Jean Lumb Lane in West Chinatown, and Jean Lumb Public School in the Fort York neighbourhood.

So I decided to come […] for just a year. That’s all I intended. But then I became involved in the Indian community here in Toronto after spending time in the archives doing research, and realized the bad image Indians have […] and so I felt I just couldn’t leave.

– Verna Johnston, quoted in I Am Nokomis, Too.

Verna Johnston was an Anishnabe author, activist, mother, grandmother, and mentor to youth and her community. A member of the Chippewas of Nawash Unceded First Nation, Verna first came to Toronto in 1945, but returned to her home community of Cape Croker before coming back to Toronto in the 1960s when she chose to stay to provide support and a safe place for her granddaughters attending school in the city. 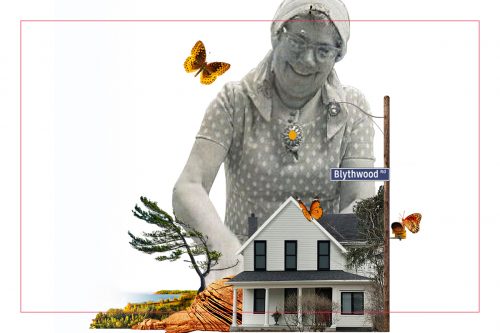 Her houses – first on Blythwood Road, then McGill Street and later on The Danforth – provided sanctuary for many Indigenous youth who sought community and support in the city. Reflecting on how her home expanded, Verna said, “it never occurred to me that I would run a boarding house for other students. I was only thinking of my relatives.”

The boarding house made its final move to the Danforth before closing in 1973. Verna, who had recently written and published Tales of Nokomis, moved back to her home in Neyaashiinigmiing (Cape Croker). She worked with the community priest, Father Labelle, to convert an old missionary house into a foster home. Tragically, that home was destroyed by fire just a day before the children’s arrival. Ever resilient, Verna acquired a cottage and barn on a farm property, and within four months of the fire, she had created a new gathering place for the community.

Following Hodgkin’s diagnosis, Verna stopped fostering and moved back to Toronto. Here, she was enraged to discover that white-operated foster homes were paid double the amount she had been paid. Verna publicly protested against the Children’s Aid Society, which eventually conceded and paid foster parents on the reserve equally.

She retired back to Cape Croker, but found herself restless and returned to Toronto, where she became a housekeeper and mentor for the residents at Anduhyaun House and Wigwamen House. Johnston passed away in 1996 and left a legacy as an exceptional community leader that inspired future generations.  Daphne Johnston one of her granddaughters who lived with her at the Blythwood Road home, blossomed into adulthood with a fulsome life. She had a successful career, six children and many grandchildren. Inspired by her grandmother, Daphne ignited more positive change by fostering 33 children. Daphne is a living example of the indelible imprint left by Verna’s selfless love and the influence she has over generations more.

Images of Verna Johnston and Cape Croker courtesy of Daphne Johnston. Image of Blythwood House in photo collage from the collections of Heritage Toronto. Collage by artist Nicole Moss.

I’m adventurous and when I’m performing I will take chances – I’m willing to make mistakes. You have to try; to not try is the worst kind of failure.

Salome Bey was an award-winning, Grammy-nominated singer, songwriter and actor. Known as “Canada’s First Lady of Jazz and Blues,” the legendary multidisciplinary performer was inducted as an honorary member of the Order of Canada in 2005. Born in Newark, New Jersey in 1933, Salome began performing and touring in the mid-1950s with siblings Andy and Geraldine as ‘Andy and the Bey Sisters.’ She first performed in Toronto in 1961 at the Colonial Tavern on Yonge Street, and settled here three years later when she married Howard Matthews. 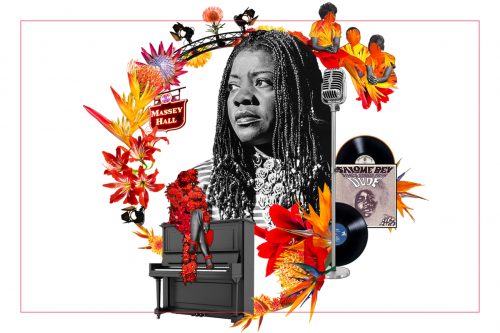 The career risk paid off and Salome established herself both in Toronto’s small but growing arts scene and on Broadway in New York, where she appeared in “Your Arm’s Too Short to Box with God,” “Dude,” and “Love Me Love My Children”. From 1978 to 1980, Bey’s cabaret show “Indigo” ran at the Basin Street jazz club in Toronto. The show about the history of Black music received two Dora Mavor Moore awards in its inaugural year.

Salome was often called “Mother Earth,” both for her stage credits – such as the role of Mother Earth in the 1972 Broadway run of “Dude” – and for her support of younger Black Canadian actors and musicians. Her influence on the arts community in Canada was widely recognized, including the 1992 Toronto Arts Award and the 1996 Dr. Martin Luther King Jr. Award for lifetime achievement from the Black Theatre Workshop of Montreal.  She died in 2020 at the age of 86.

Individual personality is one of the most charming things to be met with, either in a flesh and blood existence, or upon the pages of fiction, and it matters little to what race an author’s heroine belongs.

E. Pauline Johnson (Tekahionwake) was a renowned multi-disciplinary artist and entertainer in the late 19th century. As a Mohawk woman with European ancestry, she challenged dominant ideas about race, gender, and Indigenous rights in Canada.

Pauline was born Emily Pauline Johnson on March 10, 1861 in Chiefswood, on the Six Nations Reserve in Ontario. Her parents were George H. M. Johnson (Onwanonsyshon), a hereditary Chief of the Six Nations who worked for the federal government, and England-born Emily Susanna Howells. They provided a comfortable middle-class lifestyle for Pauline until her father’s death in 1884. Pauline took to the pen to support her family. In a few short years, she saw success in the publication of her poems in newspapers across North America.

Although Pauline’s poetry won praise in the literary community, it was an invitation in 1892 to speak at The Young Men’s Liberal Association in Toronto that launched her 17-year career in performance and activism. She navigated racism and sexism to raise awareness of the ill-treatment of Indigenous peoples and women. Her piece, “A Cry from an Indian [sic] Wife,” describing the Indigenous side of the North-West Rebellion, captivated that audience.

Following this success, Pauline published her first collection of poetry, “The White Wampum,” in 1895. It was followed by many other works, such as her collection of poems, “Flint and Feather,” which is one of the best-selling volumes of Canadian poetry.

Pauline was known to capture her audience’s attention with costume changes during her performances. When she passed away in 1913, Pauline Johnson left a legacy of work that advanced Canadian literature, the feminist movement, and Indigenous rights in Canada.

To colored women, we have a word – we have broken the editorial ice…so go to editing, as many of you as are willing and able….

An educator, abolitionist and the first Black female publisher in North America, Mary Ann gave a voice to Black communities and women. Born a ‘free person’ in Delaware in 1823, she moved to Pennsylvania early in her life; Delaware prohibited the education of Black children. Mary Ann attended a Quaker school, and by the age of 16 was teaching school herself. 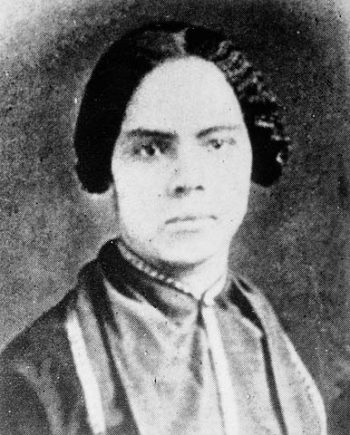 In 1848, abolitionist Frederick Douglass called for suggestions on how life might be improved for Black people in North America. Ever practical, Mary Ann replied in a letter published in Douglass’s newspaper: “We should do more, and talk less.”

By 1853, Mary Ann had moved to Windsor, and began publishing her own newspaper “The Provincial Freeman”. The following year, she moved her newspaper to Toronto and married Thomas Cary with whom she had two children – Sarah and Linton.

Initially, Mary Ann was credited in the newspaper as “M.A. Shadd” and readers assumed she was male. Mary Ann wrote: “we would simply correct, for the future, by giving here, the name in full (Mary Ann Shadd) as we do not like the “Mr.” and “Esq.” by which we are so often addressed.” A Black woman at the helm of “The Provincial Freeman” sparked outrage. Mary Ann temporarily removed her name from the front page; she declared in 1855, “we have broken the editorial ice.”

Following her husband’s death in 1859, Mary Ann returned to the United States. She was one of very few women to act as an army recruiter for the North during the Civil War. In 1869, she was the first Black woman admitted to Howard University Law School. She noted: “There is some squirming among some students. But I care not. I have an end to accomplish.”

Mary Ann graduated law school at the age of 60. She practiced law in Washington, D.C. until her death in 1893. Her philosophy reflects a tireless work ethic: “It is better to wear out than rust out.”