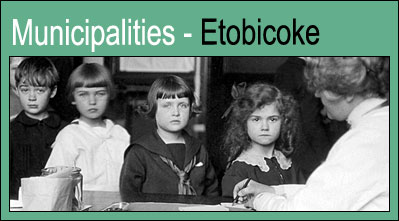 Many early records from Etobicoke have not survived, but we know that in 1945, the entire township was served by Medical Officer of Health Dr. W.K. Fenton, three public health nurses, and one part-time sanitary inspector.

Dr. Fenton, a practising doctor well respected in the community, was instrumental in developing public health services in what he called “the great and growing Township of Etobicoke.” Etobicoke’s Public Heath Nursing Service was formed in 1946, with five full-time nurses to offer a generalized public health service serving mothers, infants, school children, and seniors. In the same year, the township also began to hire more sanitary inspectors. It had the distinction of being the first Canadian municipality to hire a female sanitary inspector, Margaret Conn, in 1950.

Back to introduction
Next page – Municipalities, East York