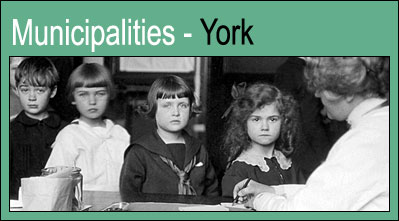 During the 19th century, York’s rapid population growth and a number of epidemics led to complaints regarding unsanitary conditions and “noxious vapours” that were thought to cause disease. As early as the 1870s, the township had appointed sanitary inspectors, but as they had no statutory powers, their work had limited effect. After a revised Public Health Act was passed in 1884, the township appointed a Board of Health and two sanitary inspectors. Dr. S.R. Richardson was appointed the medical officer of health the following year, specifically to vaccinate people against smallpox.

The problem of “night soil” (the contents of privies—so called because many cities had by-laws stating that privy cleaning had to be done at night, so it disturbed fewer people) was a significant early issue. The medical officer of health in Toronto had declared that privies had to be cleaned out regularly and that night soil could not be dumped within the city limits. Some speculative landowners in York were happy to make money by allowing the private contractors hired by the City to dump night soil on their land. Their neighbours were less happy. Board minutes in 1884 report about one property “that the stench therefrom was very bad, especially in hot weather…that several persons in the vicinity had been ill during the summer caused they had no doubt by the presence of night soil in great quantity…” York by-laws required that the night soil be chemically disinfected and covered with earth, and enforcing the by-laws took up a lot of the board’s attention at first. Eventually, as Toronto, and York itself, built sewers and outlawed privies, time took care of the problem.