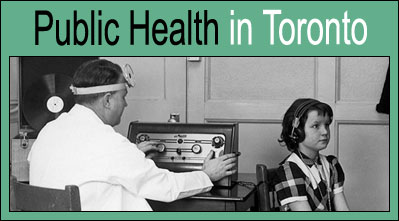 In 1833, the Legislature of Upper Canada passed an act allowing local municipalities to establish boards of health to combat contagious and infectious diseases. The first Public Health Act of Ontario was passed 40 years later in 1873. This legislation was succeeded in 1882 by a revised Public Health Act, which established the provincial Board of Health, gave increased powers to existing local boards of health, and allowed for the appointment of local medical officers of health. Toronto responded in 1883 with the appointment of its first medical officer of health, Dr. William Canniff.

The early period of public health in Toronto (1885-1929) was driven by the idea that the eradication of infectious diseases was essential for social progress. The “germ theory” gained acceptance, replacing the widely held belief that disease was spread either spontaneously or through bad smells.

The new knowledge about micro–organisms caused the Department of Public Health to focus on achieving clean water and air, in addition to such usual concerns as adequate housing and nutrition, health education, and free medical and dental services for the poor.

Dr. Charles Hastings, the medical officer of health from 1910 to 1929, was a pioneering social activist who took full advantage of the public’s interest in social reform to further his own health agenda.

He was an effective administrator and, under his leadership, the department grew to be the largest in Canada. An innovative man, Hastings made use of official City Photographer Arthur Goss to document slum conditions in Toronto, and used the photographs in publicity material he distributed throughout Canada and the United States. Partly as a result of this, Toronto became known internationally for its achievements in preventive medicine.

Dr. Hastings’ departure from office signaled a shift away from the activism of the early Department of Public Health. The next four medical officers of health, in place from 1929 to 1981, lacked Hastings’ dynamic personality and visionary passion, but offset his talents with their own abilities as professional civil servants and dedicated doctors.

Their approach was to make incremental changes in public health management, with continued improvements to existing services, and the adoption of new medical developments, such as the polio vaccine.

They faced many challenges, including severe budget constraints imposed by the Depression in the 1930s and World War II. They also had to come to terms with the changing nature of health concerns. With infectious disease largely under control by the ‘50s, they turned more of their attention to “lifestyle” diseases, such as lung cancer, alcoholism and heart disease, and to social issues, such as family planning.

By the later 1970s, public fears of emerging environmental hazards added a new emphasis to the department’s work.

Today, Toronto Public Health continues to further the goals shared by the earlier Department of Public Health, to build a healthy city where everyone may enjoy the highest level of well-being.

While continuing to combat the spread of disease, Toronto Public Health focuses its energies on community advocacy, taking a leadership role in promoting healthy living, community education and mobilization, emergency planning and preparedness, and other innovative initiatives to encourage us all to be as healthy as possible.