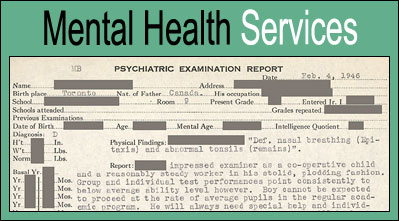 It is an old idea that the past was less stressful than the present day. Medical Officer of Health Dr. Charles Hastings wrote in 1916 that “we have become more fretful, mercurial, wayward and impulsive than we used to be…and thus are prone to those breakdowns that lead to mental disorders. This is in a large measure due to the crowding of people into towns and cities where hustling and nervous agitation and irritation are inevitable.”

In 1919, the newly formed Canadian National Committee for Mental Hygiene made a survey of Toronto schools, identifying children with mental illnesses and developmental disabilities. The Department of Public Health provided a specialized nurse to work with these children, and the Board of Education started classes where children who struggled with academic work could learn a trade to make a living. The department’s Division of Mental Health was established soon afterwards, in 1921.

In the 1920s, the department formed a “mental hygiene” division, whose staff included psychologists and a social worker. The goal of the division was to encourage “the development of normal personalities that will stand the strains — social, domestic, economic, etc. — to be met during life.”

The reports shown below are samples of psychiatrists’ reports on school children. The children were probably recommended for evaluation because their teachers noticed they had academic or behavioural problems. As the evaluations show, social and family problems, as well as physical and mental ones, often had to be addressed.

As seen in these scans, some information has been blocked out to preserve the privacy of the people mentioned.

Medical Officer of Health Dr. G.P. Jackson wrote in 1933 that society must get rid of “the idea that there is anything blameworthy in mental illness, that mental disability in the family is something to be ashamed of. This had been accomplished in the case of tuberculosis—it can be done also in the case of mental illness.”

Today, mental health promotion is an important part of the services provided by Toronto Public Health.

Back to introduction
Next page – Services to Infants and Parents