The Wallace Emerson Neighbourhood Streets Plan (NSP) will identify, prioritize and recommend improvements to traffic operations and street design to improve local streets and create a safer neighbourhood. Drawing on input from community members and local stakeholder groups, as well as data collected through traffic studies, the plan will consider the needs of all road users in the neighbourhood including vulnerable road users such as seniors, school children, and people walking and cycling.

The plan will recommend short-term improvements (1-3 years), which can be made using quick build materials like paint and bollards, as well as more permanent long-term improvements, which typically take 3 or more years to implement.

The Wallace Emerson Neighbourhood Streets Plan (NSP) study area is bounded by Lansdowne Avenue to the west, Dufferin Street to the East, Dupont Street to the north and Croatia Street to the south. It is primarily a residential community of single family homes with commercial and retail uses concentrated on Bloor Street. There are three schools located in the area: Pauline Junior Public School, St Sebastian’s Elementary School and the Bloor Collegiate School, temporarily relocated from its original location at Bloor Street and Dufferin Street. Anticipated travel patterns of new community members moving into the area and/or using the new Wallace Emerson Community Centre and parks will also be considered in the planning process. 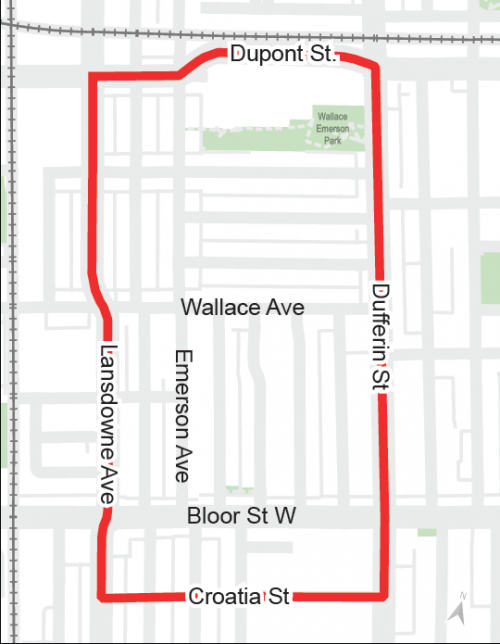 In response to concerns about traffic conditions in the Wallace-Emerson community, local residents formed the Wallace Emerson Traffic Management Committee (WETMC) in 2019. The group prepared a traffic plan for the neighbourhood which included requests for various traffic calming measures including speed humps, staggered parking with bump outs and planters, new stop-controlled intersections, turning prohibitions, and contraflow bikeways. The plan was endorsed in principle by the Toronto and East York Community Council in March 2020 (See decision TE14.46), and since that time a number of the recommended changes have been implemented.

Have your say! Use our interactive mapping tool to share your knowledge of areas of concern or your ideas of improvements that you’d like to see in your neighbourhood.

In the second phase of consultation the project team will hold a public event to seek addition feedback from residents and stakeholders based on the initial feedback received in the first phase. Notification about future public consultation events will be provided through mailed flyers, project email updates and on this web page.

Please email WallaceEmersonStreets@toronto.ca to be added to the project list and to stay informed.